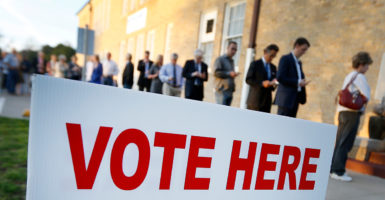 Voters line up to cast their ballots on Super Tuesday March 1, 2016, in Fort Worth, Texas. (Photo: Ron Jenkins/Getty Images)

Two years ago, I thought voter fraud was a rarity in the United States. I figured that such crimes took place only in nations with corrupt and broken governments—not in “the land of the free.”

The first person to open my eyes to the amount of voter fraud in America was Hans von Spakovsky, a senior legal fellow at The Heritage Foundation, where I work.

During a lecture at Heritage last year on election integrity, von Spakovsky told the story of a woman named Wendy Rosen. In 2012, Rosen won the Democratic nomination for Maryland’s 1st Congressional District and was set to face off against incumbent Rep. Andy Harris, R-Md.

Election Day was quickly approaching when several Maryland Democratic leaders brought allegations of voter fraud against Rosen. Initially, Rosen denied the allegations, but she eventually confessed to voting in Baltimore in both 2006 and 2010 despite her legal residence being in Florida.

While Rosen’s story is disturbing, especially considering the fact that she was almost elected to Congress, her actions are not rare.

The Heritage Foundation’s voter fraud database cites nearly 1,200 proven cases of voter fraud in America. Each case is documented in the course of nearly 400 pages.

Jason Snead, a senior policy analyst at Heritage, wrote in a commentary that “the Heritage database is not a comprehensive list of all the fraud that has struck American elections in recent years.”

“That number is likely far larger—especially since so few actual instances of election fraud are detected, investigated, and prosecuted to begin with,” Snead wrote.

I recently had a conversation with Logan Churchwell, CEO of Public Interest Legal Foundation, a 501(c)(3) public interest law firm dedicated entirely to election integrity. He shared several interesting cases with me, saying:

Right before the 2018 presidential election in South Texas in Hidalgo County … someone reached out to me and said, ‘I’m a U.S. citizen. I’m Hispanic, but my mom, and my family, they’re all green card [holders]. I was born here, but they’re getting mail from the Texas Democratic Party saying: Register to vote. You’re eligible. Register to vote. We want you to. You need to go vote against Trump. You need to go vote,’ [or] however they were pitched.

Churchwell discovered, after a little digging, that this was happening to green card holders all over Hidalgo County, home to the border city of McAllen, Texas.

“We took all the information up and we essentially wrote up a little report,” Churchwell said, “and submitted it to the district attorney, the secretary of state, and the Texas attorney general … They researched it, said, ‘Yes, this is an issue,’ and they forwarded it onto the attorney general’s office for criminal investigation.”

This was a case of clear corruption, but voter registration of noncitizens is not always so blatantly executed.

“Seven times out of 10 when someone is illegally registered to vote as a noncitizen, they did not go and try to get registered,” Churchwell told me. “They signed the wrong form that was put in front of them as they engaged with a driver’s license office, or even filling out a community college application. They did not know that the community college application doubled as a voter registration form.”

Poor bureaucratic oversight and red tape has led to estimated thousands of noncitizens unknowingly registering to vote, he said:

The noncitizen became registered because they filled out an application and they thought, ‘Oh, it’s an application. It’ll either be accepted or rejected. I’m either eligible or I’m not and it’s for them to determine eligibility.’ When in reality that application is a valid application if it’s filled out in its completeness, in its entirety.

It’s not a question of whether they should be signing it or not. They’re supposed to know that. So when the voter registration process is complete and they start getting mail about ‘Would you like to vote by mail?’ they think, ‘Well, I guess I passed that test, so I’m going to go vote now.’

The voter registration system is broken, and one key component of this brokenness is the national “motor voter” law.

Anytime you go to the DMV to apply for a license, you are asked if you would like to register to vote.

Churchwell notes that “the immigrant who is here, has a visa, needs a driver’s license because they’ve got a work visa.” He said:

They have to get to work. They go get their driver’s license, they show all their paperwork, they’re here legally, nothing to be worried about. And then all of a sudden, they get offered voter registration and it’s offered to them in a language they can’t read. Or they think, ‘Well, if you’re offering it to me, I guess I can do it. What do I know? I’m an immigrant. You’re an American. You work for the government. I don’t.’

Voter fraud, intentional or unintentional, is a crisis compromising the freedom and fairness of all American elections.

It is time for widespread reforms, such as voter ID laws suggested by Heritage’s von Spakovsky. It is time to ensure the safety of free and fair elections.