Voter Fraud Is Real. This Searchable Database Proves It. 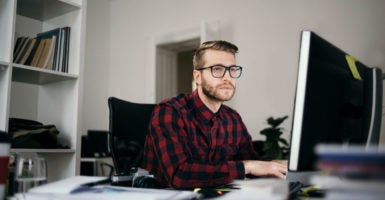 With the addition of powerful new search functions, Heritage is giving Americans a quick and easy way to sort through 1,088 documented instances of fraud, to see how nefarious election activity has affected their own states and communities.

Anyone who uses the database will quickly see that the left’s claims that election fraud does not exist are as baseless as they are persistent.

Proving the falsehood of those claims is the raison d’être of the database. Heritage researchers diligently track and monitor cases as they work their way through the courts, rigorously examining each potential entry for definitive proof of fraud.

That evidence can take many forms: a criminal conviction, a civil penalty, or a judicial finding that fraud occurred, among others.

This naturally means that the Heritage database is not a comprehensive list of all the fraud that has struck American elections in recent years. That number is likely far larger—especially since so few actual instances of election fraud are detected, investigated, and prosecuted to begin with.

Given that each entry is supported by court documents, government records, or reputable news reports, one would hope that a reasonably-minded skeptic would examine the large—and growing—cache of data Heritage has compiled and conclude that election fraud does, in fact, exist.

Never underestimate the ability of anti-election integrity activists to willfully blind themselves—and the country—to the facts in pursuit of a political agenda, however.

Not long after the database was officially entered into the record of President Donald Trump’s Election Integrity Commission, the Brennan Center for Justice published a deliberately misleading report purporting to debunk virtually every case in the database.

The outcome of that report was likely never in doubt: Brennan Center staffers seemingly had little interest in conducting an intellectually honest, unbiased analysis of Heritage’s findings.

Facts matter, however, and the Heritage database has them. With its new and improved search capability, it is easier than ever to bypass liberal middlemen and see those facts for yourself.

Users now have the option to search not only for the names of particular fraudsters, but to sort election fraud data through a variety of filters, including state, year, and type of case or type of fraud. This powerful capability permits anyone to drill down into Heritage data and easily see how fraudsters may have affected elections in their own backyards.

For example, Ohioans have recently been following the upcoming Supreme Court case Husted v. A. Philip Randolph Institute, in which Ohio is defending its process for purging outdated and inaccurate entries on its voter rolls.

Maintaining state voters rolls is critically important. A 2012 Pew study found that nationally, nearly 1 out of every 8 voter registrations was inaccurate, outdated, or duplicative. Nearly 3 million individuals were registered in two or more states, and 1.8 million dead people remained on state rolls.

The consequences of tolerating these inaccuracies are real: Evidence is emerging of potential wide-scale double voting and unlawful registration and voting by noncitizens.

Are there really Ohioans who cast ballots in the name of deceased Buckeyes? A simple search of the Heritage database for Ohio cases reveals that yes, they do.

Russell Glassop cast an absentee ballot in 2012 in the name of his late wife. Marguerite Kloos cast one in the name of her late sister. Both pleaded guilty and entered diversion programs.

And then there’s the case of Melowese Richardson, a convicted former poll worker who voted twice in 2012, and in the names of others, including her comatose sister, in three other elections. Richardson was sentenced to five years’ imprisonment, was released early—and was then applauded and embraced at an Ohio “voting rights” rally by none other than Al Sharpton.

These cases need and deserve to be highlighted. They are clear acts of fraud that served essentially to disenfranchise legitimate, lawful voters. And they are just the beginning. With nearly 1,100 proven instances of fraud spanning 47 states, the Heritage database is stark evidence of a broken system in need of reform.

That reform should begin with efforts like those at issue in the Husted case to rigorously maintain the integrity of voting rolls. Congress mandated that states do so in 1993 with the passage of the National Voter Registration Act. Unfortunately, many do not, and it is long past time for every state to take seriously this basic duty to ensure that voter rolls are free of inaccuracies.

Beyond that, a host of robust policies merit adoption—including voter identification laws and proof-of-citizenship requirements—in order to protect the sanctity of the ballot box, and the public’s confidence in the integrity of the process.

Until then, sadly, the Heritage election fraud database will only continue to grow.