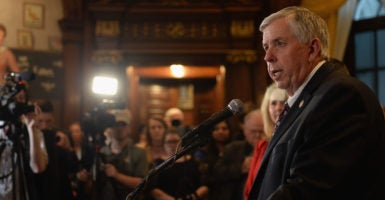 Missouri Gov. Mike Parson talks to reporters May 17, the last day of the legislative session, at the state Capitol. (Photo: Michael B. Thomas/Getty Images)

Abortions rights activists filed a lawsuit against Missouri government officials over the state’s new ban on abortions after eight weeks.

Planned Parenthood, the American Civil Liberties Union, and the Paul, Weiss law firm filed the lawsuit Tuesday against Missouri Gov. Mike Parson, a Republican, and other state officials in an attempt to block abortion legislation passed in May and set to go into effect in August, CNN reported.

“By imposing a ban on abortion prior to viability, the 8-Week Ban violates Plaintiffs’ patients’ rights to privacy and liberty guaranteed by the 14th Amendment to the United States Constitution,” the groups wrote.

The pro-choice groups said the law violates the Roe v. Wade ruling of the Supreme Court since the ban forbids Missouri women from exercising “their constitutionally protected right to a pre-viability abortion.”

Doctors who defy the law and perform abortions after eight weeks could face up to 15 years in prison. The law also prevents minors from obtaining an abortion without written parental consent and prevents doctors from performing abortions if they know the mother wants to terminate her pregnancy because her unborn child has Down syndrome.

Parson’s office did respond to a request for comment on the suit in time for publication.

“For years, anti-abortion politicians in the Missouri General Assembly have been pushing abortion care further and further out of reach,” Tony Rothert, acting executive director and legal director of the ACLU of Missouri, said in a written statement.

Planned Parenthood “will not cower to politicians who are trying to dismantle our access to safe, legal abortion—not in Missouri, and not anywhere else,” said Alexis McGill Johnson, acting president and CEO of Planned Parenthood, according to CNN.

“These dangerous and illegal bans put people’s health and lives at risk,” Johnson added. “We will fight to ensure that every person can still access reproductive health care; no matter what.”

Planned Parenthood and the Paul, Weiss law firm did not respond to requests for comment.