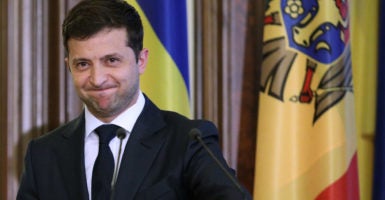 There is an old saying that I made up: “Nobody wants to be a suburb of Moscow.”

That’s the sum of decades of experience witnessing how the Soviet Union abused captive nations, now only to watch history repeat itself through Russian President Vladimir Putin’s destabilizing foreign policy.

Put Ukraine at the top of the list of free people who are so over Moscow’s bullying. There is no better time for President Donald Trump to make common cause with Volodymyr Zelenskyy, Ukraine’s new president. Seeing them stand side by side in the Oval Office would send Putin and the free world the right message.

Such a meeting also would be an opportunity for Trump to send some important messages to Zelenskyy amid concerning reports that the Ukrainian president is pushing a radical “lustration” policy. Zelenskyy’s aim reportedly is to purge officials who held power after the Maidan uprising in February 2014 that ousted Ukraine’s pro-Moscow government.

The ambassadors to Ukraine from G-7 countries issued a public statement July 12 on this matter. If reports of a purge are true, this is cause for concern and makes a meeting between Trump and Zelenskyy even more important.

No nation on the planet has suffered more unwanted meddling in its internal affairs than Ukraine. Not content with illegally seizing Crimea, Putin continues to underwrite both hot and cold wars to undermine Ukraine’s democracy.

Of course, the monster in Moscow has strategic reasons for wanting to press his thumb on Ukraine. An even more important political message: “If you live in the Kremlin’s shadow, you are their creature to do with as they will.”

Putin practices the most regressive style of authoritarian rule imaginable, with the kind of killer instincts that ought to have gone out with Attila the Hun.

As the “exceptional nation,” America, of course, ought to stand with any people who stand against a bully, any people who share our creed that the people are sovereign and that government governs by our consent, on our behalf.

That was certainly the message Ukraine voters sent when they overwhelmingly elected Zelenskyy, picking a leader who vowed to fight corruption and root his country even more deeply in the West.

There are also practical reasons why a Ukrainian-American partnership makes sense. In an era of great power competition, small powers such as Ukraine matter a good deal.

First, geography matters. In geopolitics—as in real estate—a critical consideration is location, location, location. To a major power, another country’s greatest asset might be its map coordinates rather than the size of its arsenal or bank account.

Part of the reason why the U.S. must insist that NATO continue to keep its membership door open is because including some nonmember nations would enhance collective security due to their geographic location. Ukraine is one of those countries.

Second, freedom matters. Like-minded nations make better partners. NATO works in part because the alliance is a partnership of free nation-states. The foundational rationale of the transatlantic alliance is that free and independent states have the right to associate for the purpose of collective security.

To close NATO’s door to new members would undermine what NATO stands for: the right of free peoples to choose their future. Again, keeping Ukraine on the list of candidates is a plus for the collective security of Europe.

Third, contribution matters. Small nations can be net contributors to peace, security, and economic development. We have seen that repeatedly. Ukraine has potential to be a net contributor.

Here is maybe the most important reason of all for Trump to stand with Zelenskyy. The best way to keep Putin from making a mess of the West is to make clear to Moscow that they don’t get a veto on how any free nation chooses to address its collective security, domestic politics, and economic future.

Now is exactly the time for Trump to send this strong message to Putin.

Ukraine is heading into parliamentarian elections Sunday. Zelenskyy is hoping for a big win to further solidify his mandate. However, regardless of the outcome, the U.S. must be prepared to work with Ukraine to advance common interests. Make no mistake: Russia will be meddling in the election process.

A fourth reason for Trump to welcome Zelenskyy to the White House is that, in the long term, it will support the president’s policy of figuring out how to get Putin on the off-ramp from trying to compete with and destabilize Western Europe.

As with every major competition, the essence of the Trump doctrine is to show a tough face to the competitor; force the competitor to respect your interests; and then offer opportunities for cooperation rather than competition.

The more Trump shows that the freedom of Ukraine is not on the table for compromise or negotiation, that Putin’s brutal tactics are unwelcome, unjustified, and intolerable, the sooner Putin may get the message and back off.

My guess is Trump and Zelenskyy are two leaders who have a lot in common. They are both unconventional businessmen and statesmen with a passionate love for their countries, who want only the best for their people and are willing to suffer any calumny and hardship to deliver.

If Trump welcomes Zelenskyy, likely all Washington will be behind him because of broad, bipartisan support for Ukraine.

And if Trump green-lights even closer U.S.-Ukraine ties, both sides could take many practical additional steps to make Ukraine, Europe, and the transatlantic community more safe, more free, and more prosperous.