Misrepresenting Themselves at the Border 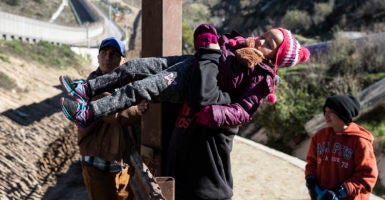 Crossing the U.S.-Mexico border with a child “is a near guarantee of a speedy release and an indefinite stay in the United States," says the Department of Homeland Security. Pictured: A Central American man passes a migrant girl across the border to reach the United States on Dec. 30, 2018, in Tijuana, Mexico. (Photo: Cristopher Rogel Blanquet/Getty Images)

It’s not just the number of individuals crossing our southwest border illegally that’s surging; it’s the number of families. But many of those “families” turn out not to be families at all, but frauds trying to exploit loopholes in federal immigration laws that allow families to avoid detention and deportation back to their native countries.

In May, the Border Patrol intercepted more than 144,000 illegal aliens. That was the largest monthly total in more than a dozen years.

From Oct. 1, 2018, through May 31, 2019, the Border Patrol apprehended almost 600,000 illegal aliens, of which family units and unaccompanied minors represented 66%, also a significant increase.

Why has there been such an increase in family units?

According to testimony by officials of the U.S. Department of Homeland Security on June 26 before a Senate committee, it is because aliens know that, when it comes to families, “DHS must, pursuant to a court order, release them quickly—generally within 20 days—and that they will be allowed to stay in the U.S. indefinitely while awaiting protracted immigration court proceedings.”

In other words, crossing with a child “is a near guarantee of a speedy release and an indefinite stay in the United States.”

As the DHS officials told the Senate, “these families are not concerned with being caught by the Border Patrol—they are actually turning themselves in, knowing that they will be processed and released with a court date years in the future.”

This is due to the fact that human smugglers are “exploiting these loopholes to encourage more migration” by telling aliens “that anyone who arrives with a child will not be deported.”

Almost all of these smugglers work for the dangerous and brutal Mexican drug cartels and often beat, assault, rob, and rape the individuals they are smuggling across the border.

As one would expect, many of these aliens never show up for their scheduled immigration hearings because they know they have no legal right to be in the country. They just disappear into the anonymity of the heartland after they are processed and released by the Border Patrol.

Since being part of a family is a “Get Out of Detention Free” card, it should come as no surprise that a lot of fraud is apparently going on.

Gregory Nevano, the assistant director of DHS’ Homeland Security Investigations program, recently told a House committee that in just a two-month period, they identified 316 fake family units when they detected fraudulent documents being used by the aliens.

DHS also initiated a pilot DNA testing program in El Paso and McAllen, Texas, that ran from May 6 to May 10, 2019. DHS tested 84 family units during those four days—16 turned out to be fake families. In other words, almost 20% of these supposed families were frauds.

Mr. Nevano also related that Border Patrol agents said other “families” who were not selected for testing “voluntarily came forward and admitted they were part of a fraudulent family, as they heard/witnessed that DNA testing was being conducted.”

In fact, DHS has evidence that aliens and human smugglers are “renting” (and even buying) children to get into the country.

DHS caught a 51-year-old Honduran who admitted that the infant child he initially claimed was his son was actually purchased from the birth mother for the equivalent of $84.

DHS mounted an operation called “Noble Guardian” that identified alien adults who entered the country with accompanying children as “alleged family units, and then the children subsequently departed” the U.S. on commercial airlines back to their native countries.

DHS believes the children are “being used and recycled” for the “purpose of defrauding the United States.”

We really are facing an unsustainable and unprecedented crisis on the border. And the loopholes in our immigration system—which Congress refuses to fix—are being exploited in a way that is not only dangerous to our security, but for those aliens who, as a DHS official told Congress, “put their lives in the hands of smugglers and make the dangerous trek north to the southwest border.”