Switzerland Has a Budget Surplus. Here’s How, and What the US Could Learn. 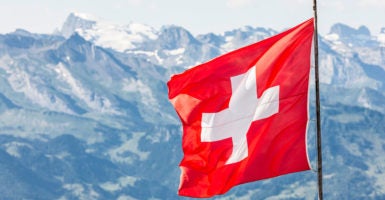 The Swiss budget for 2020 will have a $615 million surplus, even after 2019 tax and pension reforms lowered revenues and raised spending. (Photo: Getty Images)

As much of Washington seems resigned to sit idly by and allow the federal government to gorge on trillion-dollar deficits and push the national debt to 78% of gross domestic product—the highest levels in the post-World War II era—it might seem like a fiscally prudent budget is the stuff of fantasy.

After all, the Congressional Budget Office’s 2019 Long-Term Budget Outlook shows that, if current government policies remain in place, the federal debt will rise to an unprecedented 144% of GDP, and annual federal deficits will increase by nearly 6% of GDP over the next 30 years.

If the long-term outlook becomes reality, the national debt may be beyond the point of no return.

But it isn’t too late to for lawmakers to reverse course.

In the face of the Congressional Budget Office’s bleak outlook, prudent Americans can retain hope, thanks to our sister republic, Switzerland.

Switzerland has long been known for its natural beauty, world-renowned watchmakers, and master chocolatiers, but one of Switzerland’s greatest features is far less visible; namely, its budget.

As Reuters reports, the Swiss budget for 2020 will have a $615 million surplus, even after 2019 tax and pension reforms lowered revenues and raised spending.

Switzerland is a country two-thirds the size of West Virginia, with a population smaller than New Jersey’s and a GDP about 3.4% of that of the United States.

If the U.S. ran a surplus like Switzerland’s in 2018, our government would have a $117.5 billion bonus. That’s a lot of cheddar—or, should we say, a lot of Emmentaler.

The secret of Switzerland’s budgetary success is simple: The Swiss  follow the rules.

As The Heritage Foundation’s Romina Boccia notes, the Swiss government is restrained by what is called a “debt brake”—a constitutional balanced-budget amendment that requires the government’s budget to balance over the course of a normal business cycle.

The Swiss rule has successfully cut debt-to-GDP from 49% to well below 30%. It enjoys wide support, thanks in large part to its transparent, simple, and limited design.

The spending limit is also flexible, allowing for deficits during economic downturns and requiring a small budget surplus during booms.

Compared to the debt brake, America’s fiscal rules are weak and opaque.

The Budget Control Act of 2011 placed caps on discretionary spending through 2021 and implemented automatic mandatory cuts that have since been extended through 2027.

The mandatory cuts have been effective at slowing spending growth, but the scope of the cuts was far too limited. The act exempts Social Security and Medicaid completely and limits Medicare cuts to just 2%. These programs, combined with interest on the debt, are driving 72% of spending growth over the next decade.

The Budget Control Act’s discretionary caps have been undermined by Congress, which has amended the law three times and increased spending by $440 billion, without accounting for the added interest costs and other long-term effects.

The Budget Control Act came about as a means to raise the statutory debt limit in return for spending cuts, a rational approach to budgeting.

The debt limit is supposed to serve as just that; namely, a limit on how much the federal government can borrow. However, since the passage of the Budget Control Act, the debt limit has disappeared. Congress has suspended the limit five times since 2013.

Rather than raising the limit to a specific value and demanding spending cuts in return, Congress has chosen to let it not exist and rack up as much new debt as lawmakers see fit.

The few other budget rules intended to slow spending are all but ignored by Congress.

The flexibility of Switzerland’s rule means that it does not need to be violated. Deficits in downturns are accounted for, and emergency spending is available with the costs spread out over future budgets.

The limited scope and lack of prioritization allowed by the Budget Control Act ensured that it would never have the success of the Swiss debt brake.

As America heads back to trillion-dollar deficits, it’s important to remember that Switzerland’s budget rule is fit for a republic like our own.

Switzerland’s federalist structure and republican foundations mirror those of the United States, much as our ballooning national debt mirrors their debt at the height of their 1990s crisis.

And like the Swiss, it’s not too late for America to change its irresponsible spending ways. We need only look to the model of Switzerland.