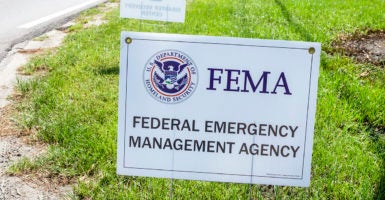 Another bureaucratic fiasco simply reinforces why the nine most terrifying words in the English language are still: “I’m from the government and I’m here to help.”

A recent news report about the Federal Emergency Management Agency, or FEMA, highlights how dysfunction within an administrative agency can get papered over for years without any kind of accountability.

The disclosure led to the resignation of John V. Kelly, a career government auditor and the department’s acting inspector general, who had ordered the reports.

The Post reported that Kelly “chose to flatter FEMA’s staff in some reports, instead of hold them accountable.”

As bad as that is, it gets worse.

“Investigators determined that Kelly didn’t just direct his staff to remove negative findings,” according to the Post. “He potentially compromised their objectivity by praising FEMA’s work ethic to the auditors, telling them they would see ‘FEMA at her best’ and instructing supervisors to emphasize what the agency had done right in its disaster response.”

This led to the extraordinary action in which the inspector general’s office retraced 13 FEMA reports.

Jennifer Costello, the deputy inspector general for the Department of Homeland Security, was undoubtedly correct when she wrote that the inspector general’s retraction of the FEMA reports was “not an insignificant matter” and that the reports “represent millions of wasted taxpayer dollars and understandably cast doubt on our credibility.”

So, basically, the glowing FEMA reports left the American people with no idea how to assess the work of our federal disaster response agency, which has a budget of $18 billion as of 2018.

Accountability developed only in 2016 when, according to the Post, House Republicans began to ask questions about a response to flooding in Louisiana that had received a glowing inspector general report based on an internal audit.

Something clearly was wrong with the FEMA reports, Mike Howell, senior adviser on executive branch relations at The Heritage Foundation, told The Daily Signal in an email. Howell previously was oversight counsel in the Department of Homeland Security and senior counsel at the House Committee on Oversight and Government Reform.

“A few years ago when I was on House Oversight, we were reviewing the federal response to major flooding in Baton Rouge, [and] we found tons of issues, tons of wasted money, fraud, etc.,” Howell said, adding:

The inspector general then issued a report that said FEMA did a great job. We flipped out and confronted them with the obvious evidence of FEMA not doing a great job. The result was they retracted the report and then began a look back at the series of after action reports the office of inspector general was issuing post disaster. Turns out nearly every one gave FEMA shining stars.

Americans generally expect the federal government to play an active role in responding to natural disasters and crisis.

The resources drawn from taxpayers are vast, but they aren’t infinite and shouldn’t be treated as such.

As the nation’s debt piles up, we need to be more cautious before we throw our hard-earned money into the salad bowl of endless acronyms that defines the modern federal government.

Even causes that have broad support can become wasteful calamities.

It’s clear that handing enormous power solely to unchecked bureaucratic agencies opens the path for both monumental waste and outright abuse of power.

This is not the constitutional system of checks and balances that the Founding Fathers had in mind.

The FEMA report disaster is just the latest evidence that demonstrates the need for Congress to more actively take back the power it has surrendered to the “fourth branch” of government—our vast and growing federal bureaucracy.