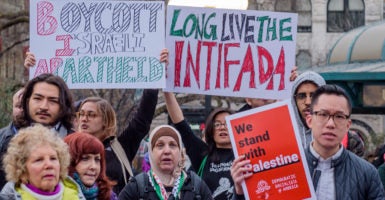 Editor’s note: A previous version of this article has been removed. It has been updated to reflect that Sen. Rubio’s bill would not result in the infringement of any person’s First Amendment freedoms, but instead would ensure that federal law would not stand in the way of the right of state and local governments to withhold business contracts from certain entities based on concrete actions taken.

The Florida Republican also called for Congress to pass a bill—the Combating BDS Act—allowing states to “go after” the movement, which considers Israel an apartheid state and argues in favor of various economic sanctions against it.

Rubio’s goal of combatting an anti-Semitic and economically wrongheaded movement is laudable.

To qualify for this protection from federal interference, a state and local law must also meet certain notice and timing requirements.

As it stands, Rubio’s bill raises no First Amendment concerns. In plain English, it simply says that no federal law will interfere with state and local laws that prohibit governments from doing business with entities participating in the Boycott, Divestment, and Sanction movement.

The bill’s critics argue that the bill would give “legal cover” to state laws that violate the First Amendment rights of businesses engaged in the Boycott, Divestment, and Sanction movement by discriminating against them based on their viewpoint.

It’s unclear what they mean by “legal cover,” but whatever it means, the bill provides no such thing.

The bill does not address the merits of any of the constitutional issues that would likely be raised in response to any anti-Boycott, Divestment, and Sanction laws that the states might choose to enact. It would leave the states and local governments free to make the constitutional arguments in favor of their laws without concern that any federal laws might preempt them before the constitutional questions are decided.

Whether state anti-Boycott, Divestment, and Sanction laws are constitutional is an open question. A district court struck down one such law in Kansas, but another district court upheld one in Arkansas.

These fights will continue in other district courts and up through the courts of appeals, but Rubio’s bill will not play a role in them. His bill makes no imposition on the First Amendment, and provides no legal cover to the states’ arguments in support of their anti-Boycott, Divestment, and Sanction laws.

The bill’s critics have missed their mark.