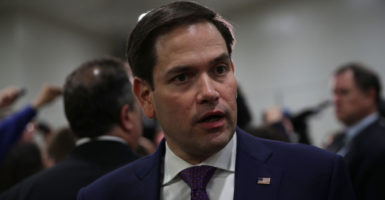 Sen. Marco Rubio is critical of the anti-Israel Boycott, Divestment, and Sanctions movement. The Florida Republican says that it misrepresents itself as a campaign for free speech. (Photo: Alex Wong / Staff/Getty Images)

Sen. Marco Rubio sharply criticized the anti-Israel Boycott, Divestment, and Sanctions movement, saying that it falsely masquerades as a crusade for free speech.

“Let’s pass the resolution condemning anti-Semitism, and then let’s put some muscle behind it, by passing a bill that actually gives states the ability to go after anti-Semitism disguised as economic policy and disguised as a free speech argument,” the Florida Republican said Tuesday at an event hosted by the Rule of Law Defense Fund.

The pro-Palestinian Boycott, Divestment, and Sanctions movement encourages boycotts and other measures to put Israel under pressure.

In March, the House of Representatives passed a resolution “broadly condemning hate and intolerance,” including anti-Semitism, but Rubio thinks more needs to be done.

“[T]he state of Israel is a state that is being targeted internationally, and by some, in a way that I view as anti-Semitism, but obviously hiding behind the veneer of public policy initiative,” Rubio said.

Tuesday’s event was moderated by Arkansas Attorney General Leslie Rutledge, whose state recently passed an anti-BDS measure that keeps the state “from contracting with entities that boycott Israel, does not violate the First Amendment, but rather, protects taxpayers from funding ‘discriminatory conduct.’”

The Arkansas law has been challenged by the American Civil Liberties Union on behalf of the Arkansas Times newspaper, which says it “‘lost numerous government advertising contracts’ after it refused to certify that it is not engaged in a boycott of Israel, and would not engage in such a boycott for the duration of the contract.”

Rubio called the BDS movement, reportedly supported by freshman lawmakers such as Reps. Ilhan Omar, D-Minn., and Rashida Tlaib, D-Mich., “nothing but anti-Semitism disguised as a public policy initiative with some constitutional ramification.”

The Florida Republican said he finds the possible trajectory of future relations between the United States and Israel to be concerning.

“If you look at U.S. relations towards Israel today, policymakers here … are a reflection of the 20-year-olds that were in school 20 or 30 years ago,” Rubio said.

He said the views being promoted on many large American college campuses today do not bode well for today’s students, who will be tomorrow’s policymakers.

“How it’s depicted basically is that Israel is some grotesque human rights violator that needs to be punished economically,” Rubio said, adding:

Imagine if we [had] multiple countries like that … how much better the world would be.