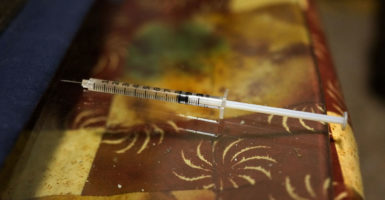 Maine just became the eighth state to legalize physician-assisted suicide, a practice that turns medicine on its head.

Instead of promoting the health and wholeness of the patient, physician-assisted suicide–also legal in the District of Columbia–promotes the dangerous idea that some lives are not worth living.

That message has far-reaching effects for the medical profession, familial relationships, and the culture.

The AMA also clarified its terminology and recommended that the term “physician-assisted suicide” continue to be used. Euphemisms like “medical aid-in-dying” obfuscate the cold, hard reality: What is at stake here is suicide, plain and simple.

The AMA’s action is a step in the right direction, but clearly insufficient to stem the rising tide of state laws.

Policymakers continue to play an important role in educating the public about the dangers of physician-assisted suicide and protecting the most vulnerable from this grave evil.

So, what’s so wrong about physician-assisted suicide?

Physician-assisted suicide is antithetical to the practice of medicine. Medicine is supposed to be about promoting the well-being of the patient, not doing away with the patient.

Once physician-assisted suicide is on the table, doctors, families, and insurers encounter perverse incentives to end the lives of the most vulnerable—the sick, the disabled, the very young, or very old.

No amount of superficial safeguards can prevent doctors and family members from pressuring their loved ones to prematurely end their lives.

None of the most common safeguards—written consent, mandatory waiting periods, witnesses—address the monetary incentives for insurance companies to end the lives of patients who require more care (and therefore cost more).

When physician-assisted suicide is an option, there are fewer incentives to pursue ethical alternatives in end-of-life care.

Physician-assisted suicide is not just a threat to individual patients. It is like Pandora’s Box: Once it’s open, it’s nearly impossible to contain its negative effects.

Once our culture grants the premise of physician-assisted suicide—that some lives are more valuable than others—we begin our descent down a slippery slope.

Other countries that have legalized physician-assisted suicide paint a dreary picture.

In Canada, as legislators contemplated expanding who qualified for physician-assisted suicide, Toronto’s Hospital for Sick Children unveiled a plan to expand this practice to children, with or without parental consent.

In the Netherlands, where caretakers recently allowed a teenage girl to starve herself to death because of her trauma after several sexual assaults, there has been frequent abuse, including the nonvoluntary euthanasia of patients.

Even Dr. Ezekiel Emanuel, one of the architects of Obamacare, noted in the Atlantic as far back as 1997, “[T]he persistence of abuse and the violation of safeguards, despite publicity and condemnation, suggest that the feared consequences of legalization are exactly its inherent consequences (emphasis added).”

Everyone deserves to die with dignity, but physician-assisted suicide does not provide dignity. It undermines it. It treats life as disposable, and that ultimately jeopardizes the most vulnerable.

Physician-assisted suicide is a dangerous practice that creates victims out of patients to the detriment of all of society.

The measure signed into law Wednesday by Maine Gov. Janet Mills, a Democrat, is a mistake for which we will pay dearly.

There is still time to change course, to move the conversation away from suicide and toward ethical alternatives for the terminally ill.