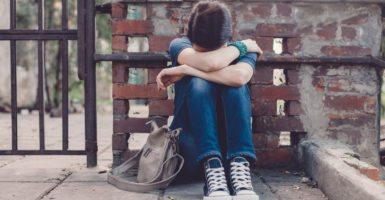 Physicians and others who try to preserve our traditional ethical and moral code should be the staunchest defenders of the right to life of those who are mentally troubled, not the first to OK death as an option. (Photo: Martin-DM/Getty Images)

The apparent suicide of a teen in the Netherlands who said she chose to die rather than endure the trauma of being sexually assaulted and raped is a stark example of the continuing deterioration of the sanctity of life.

Noa Pothoven, who was 17, told followers on Instagram that she would end her life.

“Maybe this comes as a surprise to some … but my plan has been there for a long time and is not impulsive,” she wrote, saying she was in “unbearable pain.”

“I will get straight to the point: within a maximum of 10 days I will die.”

Noa said she could not live with the trauma of having been sexually assaulted at age 11 at a friend’s party and again a year later at another get-together, then being raped at 14 by two men on the street.

Noa had contacted an end-of-life clinic in The Hague unbeknownst to her loved ones, according to The Sun. Her reported goal: to explore euthanasia as an option.

However, contrary to early news reports, she was not euthanized.

To put an end to incorrect reporting (in foreign media in particular) about her death, we refer to the statement made by friends of Noa this afternoon: Noa Pothoven did not die of euthanasia. To stop her suffering, she has stopped eating and drinking.

What is most tragic about Noa’s story is that, reportedly, her parents and doctors resigned themselves to her decision to kill herself after she declined electroshock therapy to treat her suicidal tendencies.

“After electroshock therapy was refused, Pothoven insisted she wanted no further treatment and a hospital bed was set up at home in the care of her parents,” Naomi O’Leary, a correspondent with Politico Europe, tweeted in her efforts to get the facts straight.

“At the start of June she began refusing all fluids and food, and her parents and doctors agreed not to force feed her.”

What is sobering about the “right to die” movement in the Netherlands, and the rest of the world for that matter, is that it’s far beyond a mere slippery slope.

Euthanasia, physican-assisted suicide, and suicide, as Noa’s situation shows us, are being used to groom society to accept death as a means of prematurely ending a life that is painful physically or emotionally, or is perceived as inconvenient.

Physician-assisted suicide is legal in eight states in the U.S. (with Maine becoming the most recent one Wednesday) and six countries (Belgium, Canada, Colombia, Luxembourg, the Netherlands, and Switzerland).

After years of battling and fighting, I am drained. I have quit eating and drinking for a while now, and after many discussions and evaluations, it was decided to let me go because my suffering is unbearable. … This is my decision and it is final.

I breathe, but I no longer live.

Noa wrote in her 2018 autobiography “Winning or Learning’’ that the trauma from being sexually assaulted never went away, the New York Post reported.

“I relive the fear, that pain every day. Always scared, always on my guard. And to this day my body still feels dirty,” she wrote.

This tragic story is a clear warning sign that some in society are trying to make death by suicide commonplace.

In America, politicians long have touted abortion as a “safe, legal, and rare” means to end a life that was unplanned, unwanted, or an apparent medical risk.

Similarly, pro-death advocates have pushed euthanasia as a convenient way to end suffering, or an excuse to hasten death when a patient’s “quality of life” has decreased.

Noa’s case ushers in a whole new standard of acceptance of death as a voluntary decision.

While she was hospitalized last year for anorexia, Noa reportedly had no chronic disease that “death with dignity” advocates could use an excuse for her “right to die.”

It appears Noa essentially was allowed to commit suicide because she believed she couldn’t cope with the pain of being a victim of sexual assault and rape.

Her case begs the question: How long will it be until severely depressed people are allowed to commit suicide and encouraged to do so as a way to cope with their pain?

Legislators and governors across seven U.S. states have said it’s OK for doctors to euthanize patients who request it. And who’s to say that suicide to “treat” severe depression and mental illness isn’t far behind?

Unfortunately, physicians appear to be, at the very least, not discouraging this undermining of the value of life.

Again, Politico Europe’s O’Leary wrote of Noa:  “At the start of June she began refusing all fluids and food, and her parents and doctors agreed not to force feed her.”

Physicians and others who try to preserve the traditional ethical and moral code should be the staunchest defenders of protecting the right to life of those who are ill and mentally troubled, not among the first to acquiesce to death as an option to cope with chronic illness or trauma.

Under the ancient Greeks’ Hippocratic oath, physicians across the centuries have sworn to “neither give a deadly drug to anybody who asked for it, nor will I make a suggestion to this effect.”

“Similarly I will not give to a woman an abortive remedy,” the oath continues. “In purity and holiness I will guard my life and my art.”

It should be telling to all of us that physicians in the 5th century B.C., when the Hippocratic oath was written, were well aware that circumstances would arise that would challenge such an oath.

They still forged ahead and remained faithful to their calling to save life, not hasten its destruction.