How the US Is Promoting Religious Liberty Around the World 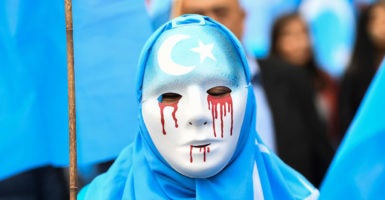 A person takes part in a protest march of ethnic Uighurs asking for the European Union to call upon China to respect human rights in the Chinese Xinjiang region and asking for the closure of "re-education centers" where Uighurs are detained, during a demonstration around the EU institutions in Brussels on April 27, 2018. (Photo: Emmanuel Dunand/AFP/Getty Images)

Around the world, religious liberty remains under threat. In China, a million Uighurs Muslims are now in internment camps—and it’s not the only nation where there’s no true freedom of religion. Sam Brownback, U.S.
ambassador at large for international religious freedom, joins us to discuss. Read the interview, posted below, or listen to the podcast:

Daniel Davis: I have the privilege now of being joined in the studio by Sam Brownback. He is the U.S. ambassador at large for international religious freedom.

Previously, he served as the governor of Kansas from 2011 to 2018, and before that he represented Kansas in the United States Senate.

Sam Brownback: Happy to join you.

I appreciate what The Heritage Foundation does. You guys really have done a great job over many years on ideas and idea generation, and then implementation of ideas, which often is the hardest piece, how you get them implemented. I appreciate all your work in that area.

Davis: We appreciate you being here.

I wanted to ask you about a couple of particular issues that you’ve spoken on here at Heritage.

But before that, give us an idea of what the ambassador for religious freedom does. I think a lot of folks may not be familiar with that position.

Brownback: It was a position created by Congress 20 years ago, and it’s an at-large position, so it’s a global position.

It deals with all countries other than the United States, and it pushes our religious freedom values as a country. So we put out a report on that on a global basis.

We cite countries that are particularly bad actors, like really what China is doing—which is what I was speaking on today—and the issues in Xinjiang, western China, what they’re doing, jailing over a million Muslim Uighurs.

We work with countries to try to encourage changing laws and practices, like Uzbekistan now has been opening up to more religious freedom, and we worked with them on drafting new laws to make the space more accessible to people so they can practice their fundamental God-given right to do with their own soul what they see fit.

Davis: When you’re in these foreign countries, meeting with other leaders, what are some of the main obstacles that you find to their protecting religious freedom?

But … they want politically to favor a majority faith, and sometimes the majority faith wants the minority faiths persecuted because we disagree with them, we don’t think they should be here.

So really you’ll see governments react one way or the other, when the safe space for government here is to protect the right to religious freedom.

Don’t get into the middle of the fight of trying to pick a winner or a loser, saying we favor this faith over that faith. Just protect the right because it’s an individual right. It’s a right that is inherent in your human dignity, and that’s what we push a lot of governments to do.

Then we also point out to them, we say, “Look, if you want to grow your economy and you want less terrorism, you also need to do religious freedom,” because this is a way forward to growing an economy, providing this basic right that people can experience.

If you want less terrorism, you need to give people religious freedom so that people won’t act out of their frustration toward the government that, “Well, if you’re not going to let me educate my children the way I see fit, I’m going to act against that.” So we remind them often of those pieces of this right as well.

Davis: You mentioned the Uighur Muslims in western China, something that you just spoke on here at Heritage. Tell us, what do we know about the situation there and what the government is doing to them?

Brownback: We know there’s over a million in internment camps. We know that there’s a heavy political indoctrination going on. We know a number of people have died.

We know a number of individuals that are missing now. We don’t know if they’re in the refugee camps, their internment camps rather, or if they are deceased.

We know this is an effort by China to mollify the Muslim population, that they’ve got this incredible Orwellian surveillance system in place with facial recognition cameras and artificial intelligence systems and social credit scores to keep people really from participating in the economy or the society if they’re a religious practitioner, if they wear a beard, if they pray, if they go to the mosque.

Davis: How does that factor into how the administration that you are a part of is dealing with China at a macro level?

The administration recently has gone after Huawei, the big technology company, and pointing out to the world that your information may not be secure if it’s handled by Huawei, and this is a big global technology company.

Davis: A lot of folks in decades past saw China opening up economically and were hopeful that that would come with political reforms and more liberty. That doesn’t seem to be happening, at least right now.

Do you think China is trying to stave off that liberalization? Are they afraid? What do you think is driving their suppression, which has just renewed in the last year?

Brownback: I don’t know because they had been really tilting toward more openness up until a couple of years ago.

The economy was becoming more open, people were enjoying some basic liberties, and then within the last couple of years, it has really tightened down.

In the religious freedom space, what we’ve observed is that when they took the regulation of religion from the government and gave it to the Communist Party, the oppression went more centralized.

They want the religion to back the government, which I hasten to add has been tried by numerous governments over the 2,000 years of Christianity and hasn’t worked. It just doesn’t work.

Davis: Ambassador, last question for you here. When you look to some of our strongest allies in Europe and elsewhere, do you see a strong coalition on promoting religious freedom or something else? What do you see?

Brownback: It’s building. It’s one of those fundamental rights that I think a lot of people say, “Well, yeah, sure, sure. We support that.” But it’s not been on the front burner.

So I would say that the coalition is building now, whereas for some period of time, it was just one of those things—sure, it’s in the panoply of rights that you have, but we’re not going to particularly push it.

This administration particularly, the Trump administration, has pushed this like no other has, and it’s going to continue to push it because we see it as that foundational right.

We also see it as one that helps build these other good virtues of a growth-oriented society and a secure society with less terrorism.

Davis: Ambassador, we really appreciate your time, you joining us here today.

Brownback: Happy to do it.