Giving Barr Declassification Authority Is a Needed Ray of Sunshine 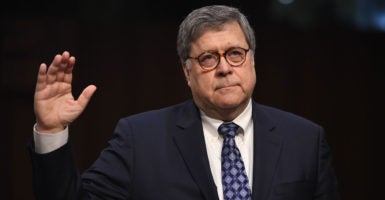 This caused hew and cry about the danger of the president’s action, but that soon will be silenced. Bright sunshine has always been the best disinfectant.

Our nation’s classification system was designed to protect sources and methods of the government’s secret work against foreign enemies—to protect who is spying and the unique methods they employ to communicate securely and do risky, sensitive things.

For citizens to eventually see this material and judge for ourselves, it’s important to remember: The U.S. government classified document system—laws and regulations—must never be used as an excuse to protect elected officials, government employees, or federal law enforcement agents from embarrassment or shame, nor must it be used to conceal illegal activity or abuse of public trust and civil rights of private American citizens.

Barr is a man of unquestioned integrity, uniquely experienced in his career and perfectly placed at this time and place in our history to address an issue that has the potential to seriously injure or permanently damage our republic.

The “public trust” is something unique to America—like our Constitution, an idea built on the foundation of the “consent of the governed.”

It is difficult to grasp these ideas until a major crisis occurs.

The importance of these documents and concepts is on display because the consent of the governed is at risk of being revoked.

A rupture of the public trust, such as we have today, is a rare occurrence in our nation’s history. The only thing that will heal this rupture and put us on the path to restoring public trust is sunshine (the disinfectant).

The public needs to see—without filters—what really has gone on inside the executive branch under President Barack Obama and Trump.

There is a disturbing body of evidence indicating the unique offensive tools, techniques, and personnel have been weaponized, inside the country, against the 45th president of the United States and many private citizens.

We now know that private citizens evidently have had their personal liberty and rights trampled on by unaccountable staff and contract employees of the FBI, CIA, National Security Agency, National Security Council, and the State Department, just to name a few.

We now know that those authorities—and the trust that came with them—were abused and applied against innocent citizens.

Section 702 of FISA, Section 215 of the Patriot Act, and the most dangerous phrase and technique, “parallel construction,” should now become topics of discussion by our citizenry.

It is safe to say these extraordinary authorities were not designed to be used inside the United States during an election cycle.

As armed representatives of the Justice Department, FBI agents are entrusted by the citizenry with the two most dangerous authorities that impact a free citizen.

The outrageous malfeasance and arrogance demonstrated by some in the FBI during and after the 2016 election is a rupture of public trust that has shaken our foundation.

We need the FBI to do its job to protect us. If Americans become unwilling to talk to or trust an FBI agent who asks for help in an investigation, then the bureau becomes a useless federal instrument.

Let us hope and pray that Barr and his investigators can bring the truth, the whole truth, and nothing but the truth, into the bright sunshine.