ICE Acting Director Says Family Deportations Are on the Table 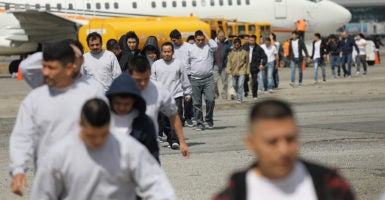 Acting director of Immigration and Customs Enforcement (ICE) Mark Morgan said his agency is not ruling out the possibility of arresting and deporting migrant families that have been ordered to leave the U.S.

“The mindset is no one is exempted. You’re either in violation of the law or not, and we take it from there,” Morgan told reporters Tuesday at ICE’s Washington, D.C., headquarters, according to The Washington Times. “That will include families.”

“I don’t think you want the director of ICE exempting a demographic that is in violation of our immigration laws based on my own political, personal ideology or moral stance,” he continued.

Morgan said that the agency is considering the deportation of family units, an action once deemed off-limits, as a way to disincentivized foreign nationals from illegally entering the U.S. Currently, migrants believe if they bring a child with them, they are essentially guaranteed entry into the country.

Data on the subject largely prove this theory correct.

Six times as many family units entered the U.S. illegally in the first half of fiscal year 2019 compared to the same time frame in the previous year, according to information provided by Customs and Border Protection (CBP). Hundreds of thousands of migrants end up released into the interior of the U.S. because ICE cannot detain these families for longer than 20 days.

Morgan told reporters that, of the migrant family units that were caught in 2017, 98% of them are still in the country.

Over half a million migrants have been apprehended by CBP so far this fiscal year, and the administration anticipates one million will be arrested once the fiscal year ends in October. Morgan said the White House expects to release about two-thirds of those apprehended because of outdated laws and overwhelmed immigration resources.

“We’re anticipating a million this year, but we’re going to allow 65% of those individuals into the interior of the United States,” he told reporters, according to the Washington Examiner.

Morgan also blasted lawmakers in Congress for the crisis, saying that they’ve “failed” to act. The acting ICE director, echoing what other leaders within the Department of Homeland Security, stressed the need for Congress to amend laws — allowing immigration officials to detain family units for longer periods of time and to allow for quicker deportation of unaccompanied alien children.