The Path to Putting Government in Its Proper Place 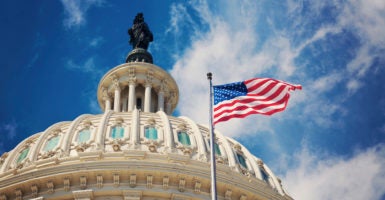 The Heritage Foundation works every day to build a free and prosperous nation where all Americans have the opportunity to achieve their version of the American dream, reaching their full potential and creating the financial security to provide for themselves, their families, and their communities.

Despite promises to the contrary, however, Congress continues to pass bills that spend more than the government takes in each year, adding trillions of dollars of debt and putting our entire economy in peril. This constant financial mismanagement is bankrupting the country and robbing future generations of Americans to pay for it.

This is why The Heritage Foundation produces the “Blueprint for Balance“: to demonstrate to the American people and our elected leaders an approach to the federal budget that reins in out-of-control spending, ensures that the government is funding its constitutionally mandated duties, and provides an environment where our prosperity as individuals and as a country grows.

In the blueprint, Heritage scholars dig deep into the federal budget to offer detailed solutions to reduce federal spending and eventually bring the annual budget into balance. They identify where there is waste, duplication of services, and fraud. They separate proper functions of the federal government, such as providing for our national defense and national infrastructure, from those areas where government has overstepped its bounds.

Our nation thrives most when the federal government is focused on core national priorities while states and localities are empowered to address issues that are closest to the people who will be affected by those policies.

Additionally, the tax reform and deregulation of the past few years have brought tremendous economic gains—especially for lower-income Americans. Unemployment is the lowest it has been in 50 years, and wages for the lowest-income workers are growing faster than wages of any other level.

The blueprint paves the way to cement these successful policies to ensure that all Americans, including lower-wage workers, young people, women, minorities, and individuals with disabilities, will continue to share in the prosperity of a healthy economy.

Recognizing that America will be strong only if she is on financially sound footing, our experts recommend important reforms to the biggest government programs in the budget, from Social Security to health care, to protect the most vulnerable, deliver better services at lower cost, and return control of personal decisions from the Washington bureaucracy to the American people.

Finally, we believe that Washington should work as the rest of us do: When our income goes up, our spending can too, and when our income shrinks, we have to make do with less.

The total amount the federal government spends in a given year should be directly linked by law to a fixed percentage of the nation’s wealth: our gross domestic product. The only way the government could spend more is if the economy grew faster than government spending over the long run.

Such a rule should be smart, allowing for deficits during an economic downturn and ensuring that the government has to cut back on spending when the private sector is strong.

These and many other ideas for bringing fiscal restraint to Washington are presented in great detail in this book. “Blueprint for Balance” presents Heritage’s extensive research that, when implemented, can lead to a freer, more prosperous America with opportunity for all.

It’s not too late to save the incredible promise that is America, but first, we have to get our leaders to make economic growth, job creation, and an end to runaway spending and debt their highest priorities.