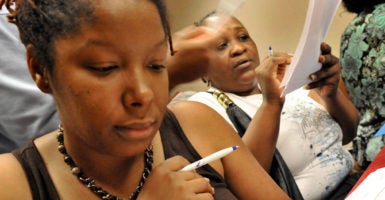 Syrone Woodard, left, reviews paperwork for her fourth-grade son in a D.C. Opportunity Scholarship Program application workshop June 25, 2011, while Charlene Lindler looks for an answer to a question while filling out an application for her son and daughter. (Photo: Mark Gail/The Washington Post/Getty Images)

Students who participated in a school choice program for low-income families in the nation’s capital were less likely to miss classes than peers who applied but did not get scholarships, a government evaluation has found.

Students in the D.C. Opportunity Scholarship Program also were more likely to give their schools a positive safety rating, concluded the study by the Institute of Education Sciences, a research branch of the U.S. Department of Education.

“For one-third of the amount spent per pupil in the D.C. public schools, the OSP [Opportunity Scholarship Program] produced kids who scored the same on tests but were happier, safer, and less truant,” said Patrick Wolf, director of the University of Arkansas Department of Education Reform.

The Department of Education’s evaluation, released Wednesday, compared achievement and other outcomes of students who received vouchers and those who did not three years after both groups applied to the scholarship program.

A pioneer researcher of the impact of school choice on character, Wolf released his own report showing a link between reduced crime and students who received vouchers from the Milwaukee School Choice Program, as The Daily Signal reported.

Although the new evaluation of the D.C. Opportunity Scholarships found a mixed effect on test scores, researchers also are interested in the impact of private schools on behavior.

Lindsey Burke, director of the Center for Education Policy at The Heritage Foundation, told The Daily Signal that the evaluation shows the program is delivering for low-income D.C. families.

All of these improvements occurred with students on a voucher receiving roughly one-third of the revenue per pupil in D.C. public schools.

What to make of the null effect on test scores? A growing body of scholarly research has demonstrated that test scores are poor indicators of the long-term impacts on student academic and later life outcomes. Moreover, parents put very little value in test score data, and instead prize school safety, values, and character development, and the intangible benefits of a school, such as caring teachers.

The D.C. Opportunity Scholarship Program “is delivering on all of those measures, and was and remains a lifeline for students from low-income families in the nation’s capital,” Burke said. “This study reinforces the value and efficacy of this critical scholarship program.”

Enacted in 2004 by President George W. Bush and reauthorized in 2011, the Opportunity Scholarship Program is the only federally funded private school choice program created by Congress. It allows students from low-income households an opportunity to have options outside the public school in their neighborhood.

The program offers a scholarship of up to $8,857 for grades K-8 and $13,287 for grades 9-12. Congress currently allocates $15 million for the program, which supports 1,645 participating students and includes 46 schools.

The study notes that reauthorization of the program in 2011 required an evaluation of its effectiveness. The study included 1,800 students who applied from 2012 to 2014 by entering lotteries.

To determine how to increase the program’s effectiveness in the future, later evaluation will focus on examining families’ experience during the scholarship and private school application process, their support from the program, and post-graduation outcomes.