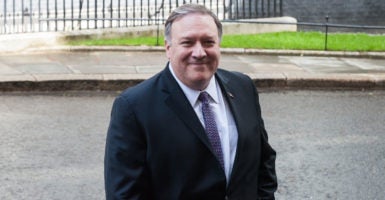 Secretary of State Mike Pompeo has set out a new U.S. agenda for the Arctic —and warned allies about China’s growing influence in the region.

In a speech delivered the day before the 11th Arctic Council ministerial meeting on May 7 in Rovaniemi, Finland, Pompeo explained how the Arctic region is changing.

“The Arctic is at the forefront of opportunity and abundance,” he said, citing the untapped oil and gas, rare earth minerals, and other resources there.

Pompeo also pointed to the rapidly increasing strategic significance of the Arctic Ocean, as reductions in sea ice create new shipping lanes that could become “the 21st-century Suez and Panama canals,” slashing travel times between Asia and the West.

Given these developments in the Arctic, the Arctic Council states—Canada, Denmark, Finland, Iceland, Norway, Russia, and Sweden, along with the U.S.—need to define the terms of international participation in the region.

Providing one such vision in his speech, Pompeo said that “all nations, including non-Arctic nations, should have a right to engage peacefully” in the region.

“But all the parties in the marketplace have to play by those same rules,” he added. “Those who violate those rules should lose their rights to participate in that marketplace. Respect and transparency are the price of admission.”

If the U.S. and its Arctic partners do not define the terms of international participation in the Arctic, other actors will. In fact, some are already at work in the region and doing just that.

Even as the U.S. advocates “respect and transparency” in the Arctic, China is making massive investments in the region—$90 billion between 2012 and 2017 alone, according to Pompeo—and is already developing shipping lanes in the Arctic Ocean.

Observers should be skeptical that Chinese investment in the region is benign, when experience shows Beijing’s investments elsewhere have been anything but.

Experts at The Heritage Foundation have documented the problems associated with Chinese investments, from Chinese firms’ failure to meet safety and environmental standards to bribery of foreign government officials to unsustainable lending that has left countries from Montenegro to the Maldives “at risk of debt distress.”

Global investment is welcome in the Arctic, but not ecologically harmful investment, or when initiated with obscure contracts and uncertain intentions.

“China’s pattern of aggressive behavior elsewhere … should inform what we do and how it might treat the Arctic,” Pompeo said.

The May 7 Arctic Council meeting itself was a success, in that it brought together its member states with its permanent participants to discuss ongoing priorities, such as protecting marine ecosystems and improving the quality of life for Arctic residents.

The council failed for the first time to produce a formal joint declaration at the conclusion of the meeting, but that didn’t reflect the overall success of the biennial gathering.

Pompeo’s trip to Rovaniemi represented a larger success for U.S. Arctic policy. The secretary of state took the opportunity to set an agenda going forward for the Arctic, one that protects Arctic states from new sources of insecurity while opening the region to new investment on a fair playing field.

Setting out an agenda, no matter how forward-looking, can be only the first step, however. The task remains of winning the cooperation and support of allies, some of whom might still see the Arctic Council’s policy responsibilities of environmental research and cultural affairs as sufficient.

As Heritage experts Luke Coffey and Daniel Kochis have explained, re-establishing the position would further demonstrate the U.S.’ commitment to the region and provide its partners with a dedicated, senior point of contact for all Arctic matters.

Iceland is now assuming the chairmanship of the Arctic Council for the next two years. With Iceland as an important U.S. ally and a member of NATO, its chairmanship presents an opportunity for the U.S. to advance its Arctic agenda, and we need to work with Reykjavik to carry out a common vision for the Arctic region.