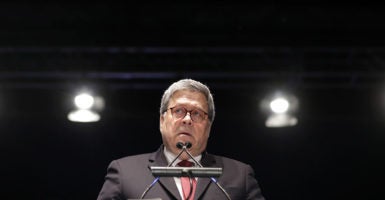 Democrats have claimed that the Trump administration is now seeking to block the release of a report that Attorney General William Barr himself released. (Photo: Chip Somodevilla/Getty Images)

Over the past several weeks, Democrats have spent their time defending the absurd notion that America is in the midst of a constitutional crisis. What, pray tell, has initiated this crisis?

The supposed unwillingness of Attorney General William Barr to turn over to Congress unredacted sections of the Mueller report, plus underlying grand jury materials.

Barr, for his part, correctly points out that the Federal Rules of Criminal Procedure bar him from revealing grand jury testimony. That rule was put in place by Congress itself.

Nonetheless, Democrats, seeking to manufacture a feeling of Nixonian chaos, have claimed that the Trump administration is now seeking to block the release of a report that Barr himself released. The Mueller report is, indeed, public.

Playing politics with our institutional health is a dangerous game. Here’s the truth: Our system of checks and balances is working just fine. Our politicians proclaim that the messy friction between the legislative, executive, and judicial branches demonstrates that our politics is unworkable. But that friction is a feature of the system, not a bug.

As James Madison explained in Federalist No. 51:

The great security against a gradual concentration of the several powers in the same department, consists in giving to those who administer each department the necessary constitutional means and personal motives to resist encroachments of the others. … Ambition must be made to counteract ambition.

The Founders worried greatly that the supremacy of the legislature would make the executive a mere footstool, propping up legislative authority. To that end, they created a unitary executive with control over law enforcement. And they gave a check against the power of the executive to Congress, which has the ability to defund departments or impeach officials.

Instead, they participate in a cynical game in which they attack the system of checks and balances itself. That’s far more dangerous than any action taken by the Trump administration to date.

The same Democrats who claim today that they are deeply concerned about the system of checks and balances are proclaiming from the rooftops that they would be happy to shatter the system to facilitate their agenda.

We’ve heard from Sen. Kamala Harris, D-Calif., that as president, she’d simply use executive authority to set gun law. We’ve heard from a bevy of Democrats that they’d consider packing the Supreme Court, or abolishing the Electoral College.

A few leftist commentators have even suggested abolishing the Senate, given its nonpopular representation.

We’ve heard from failed Georgia gubernatorial candidate Stacey Abrams, and her Democratic allies, that her failures were the fault of election fraud; we’ve heard the same about Andrew Gillum in Florida.

But here’s the good news: The Founders designed a durable system to withstand such nonsense. It continues to work, even if Democrats would prefer it collapse.