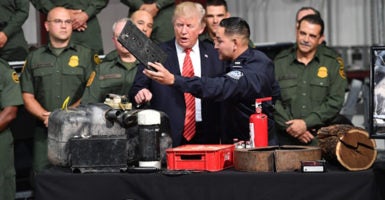 An Arizona mayor anticipates getting more federal help to transport illegal immigrants out of his overwhelmed city, where he declared a state of emergency last month.

In the Border Patrol’s Yuma sector, apprehensions of migrant families are more than three times higher so far in fiscal year 2019, which began in October. The number has shot up from 6,487 apprehensions in the same period the year before to 24,194, according to data from the Department of Homeland Security.

The Border Patrol reported Thursday that 700 illegal aliens surrendered themselves in Yuma.

KTAR-FM in Phoenix reported that about 1,000 illegal immigrants from nine different countries surrendered at the border Tuesday and Wednesday. The Border Patrol’s Yuma sector had 1,300 migrants in custody despite its official capacity of 410, according to the report.

Nonprofits have been housing the migrant families in the city, because the federal government can’t detain children for more than 20 days. But the nonprofits are strained and have run out of space, the mayor said.

Overall, the southern border has seen almost a fivefold increase in the number of migrant families arriving there by this point this year, from 39,975 to 189,584.

On another front, Nicholls talked to Trump about the president’s request for $4.5 billion to address border concerns. The mayor said he is not aware how much could go to the Yuma area.

Nicholls declared an emergency April 16 for Yuma, initially seeking help from the Federal Emergency Management Agency. The mayor told The Daily Signal on Thursday that details have to be worked out regarding what FEMA—typically thought of as responding to natural disasters—legally is authorized to do.

For a single city, Yuma was hit particularly hard, Nicholls said in an interview.

“We have borne a disproportionate brunt,” the mayor said. “The largest population is families, which involves significant needs because of the Flores decision. This is the third-busiest area for apprehensions, and we are one of the smallest communities.”

The mayor referred to the Flores Settlement Agreement, a 1997 settlement that ended a class action lawsuit against the United States and established a new policy. Under it, the federal government would release unaccompanied minors from custody to their parents, relatives, or other caretakers after no more than 20 days, or, alternatively, determine the “least restrictive” setting for the child.

In 2016, the U.S. Court of Appeals for the 9th Circuit expanded the Flores settlement to include children brought to the country illegally by their parents.

Trump has talked about transporting illegal immigrants from the border region to sanctuary cities, which don’t cooperate with federal enforcement of immigration law.

With regard to transporting illegal immigrants out of Yuma, Nicholls said he did not discuss with federal officials what cities are sanctuaries and which aren’t.

During his Oval Office meeting Tuesday with Trump and McAleenan, the mayor talked about the need for “continuing the strong federal-state-local collaboration,” according to a White House readout of the meeting.

Sen. Kyrsten Sinema, D-Ariz., met with Nicholls on Thursday to talk about issues of concern to Yuma.

“I’m working to meet the challenges Arizona communities face, including securing the border and growing job opportunities,” Sinema said in a prepared statement.