Should the Muslim Brotherhood Be Labeled Terrorists? 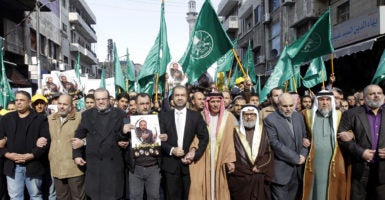 Leaders of the Muslim Brotherhood in Jordan lead a demonstration in the capital, Amman, on Nov. 28, 2014. (Photo: Khalil Mazraawi/Stringer/Getty Images)

Whether the Muslim Brotherhood should be considered a terrorist group is a question that has swirled in Western policy circles for years.

Several U.S. allies in the Middle East have a clear position. The Brotherhood was banned by the Egyptian government as a terrorist group in December 2013. Saudi Arabia did the same in March 2014, followed by the United Arab Emirates that November.

Now, The New York Times has reported that, following a recent meeting with President Abdel Fattah el-Sisi of Egypt, President Donald Trump has requested that the U.S. government consider doing the same.

White House press secretary Sarah Huckabee Sanders told the Times that “[t]he president has consulted with his national security team and leaders in the region who share his concern, and this designation is working its way through the internal process.”

This is not a particularly new proposal. Several bills have been introduced in Congress in recent years declaring the Brotherhood to be terrorists, and the Trump administration has weighed whether to try banning the Brotherhood since its first days in 2017.

The idea deserves to be taken seriously, because the Brotherhood has historically proven to be a hugely malignant force.

Founded in Egypt in 1928, the Brotherhood has done more than most to disseminate Islamist ideology. The group’s founder, Hassan al-Banna, believed that an Islamic caliphate had to be restored and an unpolluted version of Sharia law implemented if Islam was to be revived in the face of Western secularism.

The Brotherhood would eventually grow into a religious and political network spanning the globe.

While it has taken a more ambiguous approach to violence in recent years, the Brotherhood does have historic ties to violent activity. Sayyid Qutb, a key Brotherhood theorist, helped mainstream the notion that jihad could be weaponized in order to overturn governments.

Suspected offshoots of the Egyptian Muslim Brotherhood were assessed by the State Department to be “Specially Designated Global Terrorists” in January 2018, and the proscribed Palestinian terrorist group, Hamas, states in its charter that it is “one of the wings of the Muslim Brothers in Palestine.”

On an ideological level, then, this is a straightforward situation. The Brotherhood is an adversary, not an ally, and the U.S. must treat it as such. Yet on a political level, things get more complicated.

Labeling the group a terrorist organization would be a tricky needle to thread. For starters, here in the U.S., the government has, unfortunately, chosen to engage with Muslim Brotherhood legacy groups like the Council on American-Islamic Relations. Even the Trump administration has done so.

Overseas, the U.S. is forced to engage Muslim Brotherhood-linked groups because they are part of various governments. Labeling the group a terrorist organization could, for instance, end up including President Recep Tayyip Erdogan’s Justice and Development Party in Turkey, Ennahda in Tunisia, parts of the Kuwaiti National Assembly, and the ruling Justice and Development Party in Morocco.

These parties may in fact be Islamist authoritarians. Some have even facilitated terrorist activities (for example, Erdogan initially supported elements of al-Qaeda fighting against Syrian dictator Bashar Assad). Their ideology must certainly be challenged, and democratic alternatives carefully promoted. But it would be a bridge too far, politically, to call them terrorist groups.

What the U.S. should do is simply follow the law. If there is indeed credible evidence that Brotherhood groups are carrying out terrorist acts, and the U.S. can legally designate them as foreign terrorist organizations, it should unquestionably do so.

If that evidence does not exist, then the hard part really starts: The U.S. will have to work with allies to roll back the Brotherhood’s ideology. That has proven a step too far for past U.S. administrations. It would be a pleasant surprise if this one could break that cycle.