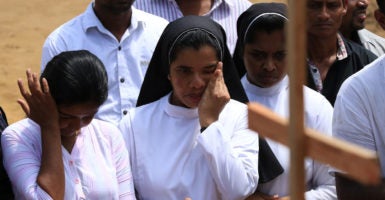 After the horrific mass murder of 50 Muslim worshippers in Christchurch, New Zealand, there was widespread coverage and a torrent of mainstream news networks contemplating the threat of white supremacy.

These conversations, completely reasonable and necessary in the face of violent attacks from a racist gunman, soon began deteriorating into politically motivated and specious claims contending that “white supremacy” had become the predominate terror threat in the world.

Well, the coordinated bomb blasts aimed at Christian worshippers on Easter Sunday, which killed at least 290 people and injured hundreds more, demonstrates the kind of meticulous planning, funding, resources, and support that is still exclusively the domain of radical Islamic terrorism.

It’s not merely that the act was planned to maximize the death toll, but that it is a continuation of long-standing efforts by Islamists to destroy the Christian communities left in Asia.

Those who kill in the name of Islam are part of a worldwide, historic, ideological, and political movement that includes, to various degrees and various reasons, radicalized men and women from both great factions of the faith.

Then again, terrorist groups—as well as their recruitment and propaganda outfits—are often functioning in Islamic regimes, which either actively sustain terror, tolerate these groups, or pay them off to engage in terrorism elsewhere.

The Christians who remain in the Islamic world are often oppressed in other ways. In a number of these nations, publicly praying in any faith but Islam is forbidden and, in many, converting to Christianity is still punishable by death.

“Islamic extremism remains the global, dominant driver of persecution, responsible for initiating oppression and conflict in 35 of the 50 countries on the list,” according to Open Doors, a worldwide Christian group.

The idea that a similar threat exists in the West is risible. There’s not a single Western country that doesn’t afford Muslim citizens the same rights it does as all other citizens. No government on Earth supports white supremacy.

There is no funding infrastructure for those who support white power. There is no Christian or Jewish denomination, or any notable political factions, in those nations that imbue white supremacy with any theological or ideological legitimacy. There is no white supremacist government trying to obtain nuclear weapons, and none sending its terrorists to other countries. In the world’s free nations, where any political party can participate in the process, the power of racist groups is minimal.

Yet the American left continues to downplay the danger, first by arguing that Islam has nothing to do with Islamic terrorism, and then by lumping every white-skinned person who commits a terrorist act into one imaginary coherent political movement to contrast against it.

It’s true that Americans have been spared much Islamic terror since 2002—a year that, curiously, nearly every graph media uses to measure domestic terrorism starts—but only because we’ve spent billions of dollars each year and immense resources, both in lives and treasure, keeping it out of the country and fighting it abroad.

Another reason the majority of Americans might not comprehend Islamic radicalism’s reach is the skewed intensity of the media coverage. Political correctness and a chilling fear of being labeled “Islamophobic” makes it difficult to honestly report on terrorism around the world.

In November 2018, for example, 42 people were slaughtered in an attack on a Catholic mission in the Central African Republic. In October, 55 Christians were murdered by a group of Islamists in Nigeria. Another 29 were killed when 10 churches were burned down in Ethiopia last summer. Another seven Coptic Christians were gunned down in Egypt—and others spared only because of the good work of police.

There are pockets of racists in the world, and individuals who engage in terrible acts of violence against innocent people. These are dangerous men, capable of doing tremendous damage. But no group threatens global peace the same way that political Islam does. None has its reach or material and theological support. None has created more mayhem and death in the world since the end of the Cold War. The Sri Lankan massacre is just another harrowing reminder.