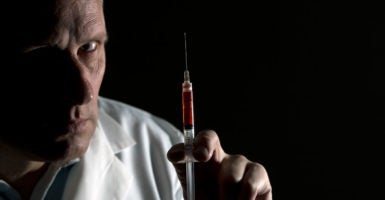 The Medical Aid in Dying for the Terminally Ill Act was signed into law in New Jersey. (Photo: shotbydave/Getty Images)

In becoming the ninth jurisdiction to legalize physician-assisted suicide, New Jersey has unleashed a Pandora’s box on its residents—and the poor, weak, and disabled will suffer the most.

The Medical Aid in Dying for the Terminally Ill Act was signed into law by New Jersey Gov. Phil Murphy, a Democrat, after it narrowly cleared both chambers of the state Legislature.

As of Aug. 1, 2019, terminally ill patients with a prognosis of six months or fewer will now be able to self-administer lethal concoctions of drugs in order to take their own lives.

Murphy claimed in a statement that this bill would “[provide] terminally ill patients and their families with the humanity, dignity, and respect that they so richly deserve at the most difficult times any of us will face.”

This could not be further from the truth.

Physician-assisted suicide directly attacks human dignity; it is anything but compassionate.

Death is neither a solution nor a treatment for human suffering. Once we accept suicide as therapeutic, who qualifies for treatment becomes a moving target.

When a country legalizes physician-assisted suicide, it is only a matter of time before the government expands who will receive suicide assistance instead of suicide prevention.

In Canada, a hospital for sick children has unveiled a plan for how to terminate the lives of terminally ill kids, with or without parental consent. In Europe, many countries have even begun to practice euthanasia, i.e. the non-voluntary killing of patients.

Even in countries still standing at the top of the slippery slope, physician-assisted suicide ultimately undermines efforts to provide more people with compassionate and ethical end-of-life care.

The introduction of physician-assisted suicide, according to Heritage Foundation health care expert Bob Moffit, ultimately prevents the most vulnerable populations from having access to quality, ethical end-of-life care.

As the demand for end-of-life care continues to increase, physician-assisted suicide emerges as a cheap alternative to appropriate palliative or hospice care.

In this scenario, it is the poor, the uneducated, and the socially marginalized who are most likely to be pressured into taking their own lives. These are the same populations who are the least likely to have someone else advocate on their behalf for proper care.

Physician-assisted suicide does not promote human dignity. Instead, it normalizes subpar and unethical care for those who are most vulnerable.

However, all of these safeguards are subject to abuse. Besides, no safeguard can overcome the first premise of physician-assisted suicide, that this practice assumes that some lives are not worth living.

Physician-assisted suicide efforts like this latest law out of New Jersey are counterproductive. They prevent policymakers from focusing on how to expand ethical end-of-life care at the expense of human lives.

That is why we must continue to oppose physician-assisted suicide wherever it is found and take action to change hearts, minds, and laws when it comes to end-of-life care.

This bill is not the end of the fight. It is only the beginning.