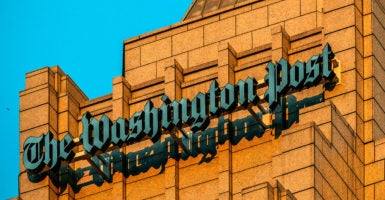 Several Covington Catholic boys, including Sandmann, were caught in a viral encounter with American Indian activist Nathan Phillips in January. An initial video made it appear like the boys donning Make America Great Again hats were taunting Phillips. Many also assumed Sandmann was disrespectful while face to face with Phillips, who was chanting and banging a drum.

A complete version of the video, however, showed Phillips walked toward the boys.

Sandmann filed the $250 million libel suit in February over the Post’s coverage of the incident.

“The Post ignored basic journalist standards because it wanted to advance its well-known and easily documented, biased agenda against President Donald J. Trump by impugning individuals perceived to be supporters of the President,” Sandmann’s lawsuit said.

But the Post said in its dismissal motion that its reporting was “accurate” and not “defamatory.”

“He and others who were present may well have been embarrassed by the attention—and hurt by the criticism—they received,” the Post’s motion said. “But Sandmann does not have a cause of action for libel against The Washington Post.”

The Post issued an editor’s note in March over its coverage, which included the following:

Subsequent reporting, a student’s statement and additional video allow for a more complete assessment of what occurred, either contradicting or failing to confirm accounts provided in that story—including that Native American activist Nathan Phillips was prevented by one student from moving on, that his group had been taunted by the students in the lead-up to the encounter, and that the students were trying to instigate a conflict.

The Covington Catholic boys and their families received death threats like being burned alive or sexually molested. There were also doxxing attempts.

The Post and Hemmer DeFrank Wessels, PLLC did not respond to The Daily Caller News Foundation’s request for comment in time for publication.