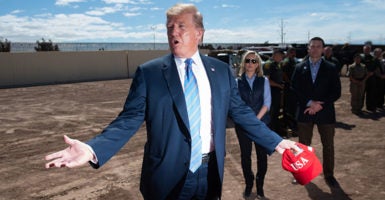 President Donald Trump was greeted Friday by a friendly crowd of border security officials in California, the state where he has the most political opposition and which has declared itself a “sanctuary state.”

He also toured the site of some border wall construction there.

Trump was briefed by officials from the U.S. Border Patrol in the Calexico, California, station near the border with Mexico.

Trump said the country is “full” and insisted the immigration asylum laws must be changed.

“Since our founding, this country has been a place of refuge—a safe haven for people fleeing tyranny, oppression, and violence,” Newsom said in a statement. “His words show a total disregard of the Constitution, our justice system, and what it means to be an American.”

Trump said the governor is out of touch with the security situation at the border.

“Gov. Newsom is honestly living in a different world, and that’s a very dangerous world he’s living in, and if he keeps living there, it’s lots of problems for the people of California. They don’t want that,” Trump said in response to a reporter’s question.

“They want to be secure. They want to be safe, and not only asylum, but many other things. … When you have an asylum situation where rough, tough people with criminal records are asking for asylum, it doesn’t work that way.”

Trump declared a national emergency after Congress failed to provide full funding for the border wall. California is among 20 states suing to block the emergency declaration.

While later speaking in front of the wall, the president described it as an “anti-climb” wall. The newly constructed wall is see-through, and some portions are 30 feet tall.

U.S. Customs and Border Protection engaged in more than 100,000 border enforcement actions in March, the most actions in a single month in more than a decade, according to a White House statement.

That represented a 516% increase from enforcement actions in March 2017. Of the actions in March, 64% involved unaccompanied illegal immigrant children and family units. In February, 75,000 migrants were apprehended or deemed inadmissible at the border.

Trump said he doesn’t want to shut down the border, but said it only “would take a day” to do so.