The Media Have Done Tremendous Damage to the Country and Themselves 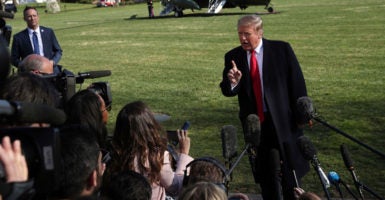 President Donald Trump speaks to members of the media on the South Lawn prior to his departure from the White House March 28, in Washington, D.C. (Photo: Alex Wong/Getty Images)

For the past two years, a large swath of the media engaged in a mass act of self-deception and partisan group think. Perhaps it was Watergate envy, or bitterness over Donald Trump’s victory, or antagonism toward Republicans in general—or, most likely, a little bit of all the above.

But now that special counsel Robert Mueller has delivered his report on Russian collusion, it’s clear that political journalists did the bidding of those who wanted to de-legitimatize and overturn Trump’s election.

While bad behavior from partisan sources should be expected, the lack of skepticism from self-appointed unbiased journalists has been unprecedented.

Any critical observer could see early on that Trump-era partisan newsroom culture had made journalists susceptible to the deception of those peddling expedient stories. Our weekly bouts of Russia hysteria all sprung from one predetermined outcome: The president was in bed with Vladimir Putin.

The natural disposition of journalists—even opinion journalists—should be skepticism. Like him or not, the notion that the president of the United States, a wealthy showman who’s been in the limelight for decades, and ran one of the most chaotic major political campaigns in history, had been secretly conspiring with Russia to steal a 50-state election should immediately have been deemed too good to be true by any decent journalist.

Yet, once-respectable, if biased, mainstream outlets churned out one deceptive and faulty story on the matter after the next. Even when corrected, these debunked pieces helped foster an environment that allowed the Big Myth to fester.

And for all the alleged reporters who spread tales of conspiracy, there were also an endless number of pundits and liberal writers who regularly accused the president, not of being merely mendacious or incompetent, but of sedition.

A bunch of crackpots were transformed into social media stars. Cable news paraded out officials with axes to grind, like John Brennan and James Clapper, and a slew of supposedly credentialed talking heads as experts. They all claimed that the most remarkable conspiracy in American history had transpired.

No one, of course, will take responsibility for two years of panic-driven coverage. Margaret Sullivan, a media columnist at The Washington Post, argues that mainstream journalists—not the ones who were rightly dubious about the collusion narrative—should be “proud” of the exemplary job they did.

Sullivan might not be aware that it was The Washington Post that helped ignite the Russia scare with two “scoops” that turned out to be completely false in early 2017: the first, a piece on Russia hacking a Vermont power grid and the other a breathless story about the reach of Putin’s fake news operations.

“There’s been so much solid reporting about the Trump-Russia mystery,” wrote Brian Stelter, CNN’s chief media correspondent, “but the media ecosystem tends to reward speculation over straight news.”

He would know. Not only was feverish speculation regularly batted around on CNN panels, but also most of the network’s anchors allowed guests to perpetuate conjecture without any pushback.

CNN’s reporters, in fact, were some of the worst offenders. It got to a point where the network had to stop firing people for acts of journalistic malpractice.

There were many false alarms. And every time a story was debunked, we were told that reporters, like all humans, make mistakes. It’s true. Unlike everyone else, though, theses allegedly innocent blunders by mainstream reporters were almost always skewed in the same direction. That takes a lot of luck.

“I’m comfortable with our coverage. It is never our job to determine illegality,” New York Times editor Dean Baquet explained, “but to expose the actions of people in power. And that’s what we and others have done and will continue to do.”

In reality, The New York Times and other outlets have hurt their ability to expose the actions of the powerful, because, even when they’re right, many Americans will have a difficult time believing them. And the powerful will certainly have an a lot easier time dismissing them as tools of the Democratic Party.

Now, I’m no fan of Trump’s use of the fraught phrase “enemy of the people” to attack the media. It’s undeniable, though, that the media have done more damage to trust in American institutions, including their own, than the Russians could ever have hoped with their Twitter trolls and Facebook ads.

Polls show that a majority of Democrats still believe Russians tampered with their votes. The 2016 election wasn’t Pearl Harbor. It isn’t the worst attack on America since 9/11. You have free will. No one determines your vote but you. In truth, Russia didn’t really “meddle” in the election. Russia, as it has always done and always will, tried to meddle in the American election.

Trump antagonists, with the help of the media, used fear over Russia to try to reverse the results of a legitimate election. Nothing like this has ever happened in modern American history.