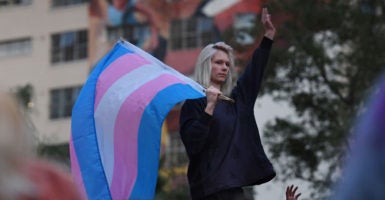 The American Psychological Association and the weight of historical evidence both challenge society’s affirmation of cross-sex identities. Pictured: Transgender individuals and their supporters rally in Los Angeles on Nov. 2, 2018, to protest the Trump administration. (Photo: Mark Ralston/AFP/Getty Images)

People who pursue a cross-sex identity aren’t born that way, and children should not be encouraged to “transition” to the opposite sex, according to a reference work endorsed by the American Psychological Association.

Yet every day I hear from another parent who tells me that a child’s therapist, after an appointment or two, strongly recommends that the parent allow the child to change his or her name and personal pronouns, live as the opposite sex, and get on the track toward irreversible medical interventions.

Laura Haynes, a licensed psychologist in California, recently reviewed the APA Handbook of Sexuality and Psychology and highlighted its research findings about transgender children.

Among those findings, cited on page 744 of Volume 1:

—“Early social transition (i.e., change of gender role, such as registering a birth-assigned boy in school as a girl) should be approached with caution to avoid foreclosing this stage of gender identity development.”

—“Early social transition may be necessary for some; however, the stress associated with possible reversal of this decision has been shown to be substantial.”

Yet we all have been bamboozled by distorted claims to the contrary from sex-change advocates, who insist the science is settled.

In fact, however, the American Psychological Association and the weight of historical evidence both challenge society’s affirmation of cross-sex identities.

The preface to the APA Handbook of Sexuality and Psychology, published in 2014, says it is endorsed and approved by the American Psychological Association, which describes itself as “the largest scientific and professional organization representing psychology in the United States and the largest association of psychologists in the world.”

I underwent my own “sex change” in April 1983. I had no idea then that I would be here today talking about the subject, or that the evidence against “born that way” had started oozing out as early as 1979, four years before I was mutilated.

>>> Related: My ‘Sex Change’ Was a Myth. Why Trying to Change One’s Sex Will Always Fail.

In 1979 an endocrinologist, Dr. Charles L. Ihlenfeld, sounded a warning on using hormones and surgery on the transgender population in remarks to a group of clinicians. Ihlenfeld had administered hormone therapy for six years to a large sample of 500 trans-identified adults.

Ihlenfeld, who is gay, told the clinicians that “80 percent of the people who want to change their sex shouldn’t do it.” Desires to change sex, he said, “most likely stem from powerful psychological factors—likely from the experiences of the first 18 months of life.”

Ihlenfeld’s comments 40 years ago foreshadowed the evidence provided in the APA Handbook, where page 743 of Volume 1 says that identifying as the opposite sex is “most likely the result of a complex interaction between biological and environmental factors.”

“Research on the influence of family of origin dynamics,” it adds, “has found some support for separation anxiety among gender-nonconforming boys and psychopathology among mothers.”

Ihlenfeld and the APA, generations apart in time, came to a similar conclusion: The desire to change sex most likely stems from early life experiences and psychological factors.

As to the wisdom and effectiveness of using cross-sex hormones and sex-change surgery to treat gender dysphoria, the evidence does not exist.

>>> Above:  The author, Walt Heyer, takes part in a related panel discussion at The Heritage Foundation. His remarks begin at 47:30 in the video.

In the United Kingdom, the University of Birmingham’s Aggressive Research Intelligence Facility conducted a review in 2004 of 100 international medical studies of “post-operative transsexuals.” It found “no conclusive evidence [that] sex-change operations improve the lives of transsexuals.”

Additionally, the evidence showed that the transsexual person, after undergoing reassignment surgery, “remains severely distressed to the point of suicide.”

A professor at Oxford University, Carl Heneghan, is one recent voice questioning cross-sex hormone use in children and adolescents. Heneghan is editor-in-chief of a respected British medical journal, BMJ Evidence-Based Medicine.

On Feb. 25, Heneghan and a fellow researcher reported significant problems with how evidence is collected and analyzed, concluding:

Treatments for under 18 gender dysphoric children and adolescents remain largely experimental. There are a large number of unanswered questions that include the age at start, reversibility, adverse events, long-term effects on mental health, quality of life, bone mineral density, osteoporosis in later life and cognition.

So the negative findings stack up, and alarms are raised about the lack of proof concerning effectiveness and safety. But administering unnecessary hormones and rearranging healthy body parts with sex-change surgeries continue undaunted by a deaf medical community.

Because I know—I drove off that cliff, and I’m still affected 35 years later.

The APA Handbook of Sexuality and Psychology, again, says that transgender people are not born that way, that cross-sex identification can change, and that the majority of children grow out of a desire to change sex if they don’t engage in social transition.

Strangely, the medical and psychological community doesn’t follow its own evidence and seems oblivious to the experiment they’re conducting on real lives, especially those of children.

The sex-change cheerleaders falsely claim, “Affirmation is the only solution.” They use distorted doctrine to lobby for laws that punish counselors and parents who say otherwise, laws that take away the rights of patients to choose their own therapy goals.

Organizations such as The Trevor Project are lobbying in all 50 states to outlaw any therapy that suggests interest in cross-sex transition can change.

Meanwhile, accounts such as these of families and lives being ripped to shreds by sex change appear in my inbox daily. I have compiled 30 of the stories I’ve received, along with recent research, in my own book “Trans Life Survivors.”

We must wake up and use the evidence provided in the APA Handbook to counter those who say transgender people are born that way.

Instead, we must fight loudly for the rights of patients to choose their counseling goals and against laws that legislate affirmation as the only therapy allowed.