US, Russian Bombers Square Off Over Europe 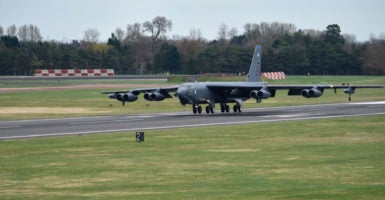 The parallel timing of the moves highlights how the ongoing war in Ukraine has rattled the relationship between U.S. and Russian military forces in Europe, spurring both camps to conduct exercises more frequently and deploy their forces closer to each other.

Mutual distrust is increasing—so is the danger of an accidental conflict, experts say.

“While a direct military conflict between Russia … and the U.S. and NATO is a very unlikely prospect, such deployments and exercises do increase the risk of miscalculations by both sides,” said Eugene Chausovsky, a geopolitical analyst who specializes in the former Soviet Union for the U.S.- based security think tank Stratfor.

On March 14, a U.S. Air Force bomber task force comprising six B-52 Stratofortresses from the 2nd Bomb Wing at Barksdale Air Force Base, Louisiana, deployed to the United Kingdom’s RAF Fairford air base for exercises with allied militaries across Europe.

It’s the largest deployment of American bombers to Europe since the outbreak of Operation Iraqi Freedom in 2003.

“The task force will operate … from the Arctic, all the way down to the Sahara Desert, demonstrating how the United States, with our allies and partners, can quickly amass at a time and place of our choosing to deter and defend against any possible aggression,” Lt. Gen. Jeffrey Harrigian, U.S. Air Forces in Europe-Air Forces Africa deputy commander, said Tuesday during a press conference in the U.K.

These kinds of air combat exercises familiarize aircrews with new regions and allow them to work out the kinks of operating alongside allied forces. The drills are also used as a way to deter potential adversaries like Russia by highlighting the long reach of U.S. airpower.

“This deployment of combat air power is a visual example of our commitment [to NATO allies],” Harrigian said. “U.S. and allied forces are on watch 24 hours a day, seven days a week.”

Back in Moscow, the Kremlin announced it had sent Tu-22M3 bombers and Iskander ballistic missiles to Crimea. According to statements by Kremlin lawmakers, the weapons deployments were a tit-for-tat response to a NATO missile defense system in Romania since 2015.

“While it’s hard to determine if the Russian deployment is a coincidence or a response to the B-52 deployment, the Tu-22 deployment to Crimea is troubling,” Peter Brookes, senior fellow for national security affairs at The Heritage Foundation, told The Daily Signal.

“It affirms Moscow’s commitment to defending and holding Crimea, it’s a clear threat to the security of the Black Sea and to the NATO countries that border it, and sends a strong message to Washington about the role Russia wishes to play in the region,” Brookes said.

“Russia’s recent announcement of a deployment of bombers has no impact on our mission; however, it does give emphasis to our priority to maintain ready and postured forces that are prepared to support combatant commander objectives,” Air Force spokeswoman Lt. Col. Davina Petermann told The Daily Signal in an email.

That day, Russian news outlets reported that two Russian Su-27 fighters had “chased away” a B-52 in international airspace over the Baltic Sea.

However, Petermann described the event differently.

“Russia’s claim that they chased away our aircraft is completely false,” the U.S. Air Force spokeswoman said. “Our bomber had a very routine interaction with the Russian Su-27 and was able to complete its mission as scheduled.”

As part of that NATO response, the U.S. military’s presence across Europe has ramped up. So, too, has U.S. military support for Ukraine, including President Donald Trump’s decision to deliver Javelin anti-tank missiles.

“Military exercises in close proximity to one another could lead to a crisis in the absence of professional airmanship or seamanship,” The Heritage Foundation’s Brookes said.

With Russian and NATO military forces now rubbing shoulders across Europe more often, chances have increased that a miscalculation by either side could spark a domino chain of retaliatory actions.

“Militaries undertake maneuvers in peacetime, making it important that potential adversaries do what is necessary to minimize misunderstandings and mistakes that could lead to miscalculation, escalation, and unintended consequences,” Brookes said.

The Air Force declined to comment on an inquiry by The Daily Signal as to what lines of communication exist between U.S. and Russian officials to limit the fallout of a potential mishap.

Designed to strike targets deep inside the Soviet Union, B-52s can carry nuclear weapons, as well as long-range weapons like cruise missiles.

Likewise, the Tu-22M3 is a Cold War-era bomber capable of carrying cruise missiles and nuclear weapons. The bomber has remained a staple of contemporary Russian military operations, including in Syria.

The Kremlin boasted that its Tu-22M3 bombers in Crimea could strike targets across Europe.

The Crimea-based bombers “are capable of destroying any target in Europe with their weapons,” Vladimir Shamanov, chairman of Russia’s State Duma Committee on Defense, said Tuesday, the Russian news agency Interfax reported.

There, Ukraine’s military continues to fight a static, trench war against a combined force of pro-Russian separatists, foreign mercenaries, and Russian regulars. So far, the war has killed more than 13,000 Ukrainians—about half of whom died after a February 2015 cease-fire went into effect.

The stalemate along the trench lines in eastern Ukraine has developed into a volatile status quo—in which Europe’s two-largest standing land armies, in terms of manpower, exchange daily fire.

Yet, the war in Ukraine is no longer confined to the trench lines of the Donbas.

On Nov. 25, Russian military forces attacked and captured three Ukrainian navy vessels transiting through the Kerch Strait on their way from the Black Sea to the Sea of Azov. Four months after the incident, Russia continues to hold Ukrainian sailors prisoner.

The naval confrontation and its fallout spurred fresh EU and U.S. sanctions against Russia in addition to ones already in place for the 2014 seizure of Crimea and the ongoing war in eastern Ukraine.

Citing the Kerch Strait incident, Trump canceled a scheduled meeting with Putin last year on the sidelines of the Group of 20 summit in Argentina.

More broadly, the war in Ukraine has spurred countries across Eastern Europe to build up their military forces.

The three Baltic countries of Estonia, Latvia, and Lithuania are now among the most rapidly militarizing countries on earth in terms of defense spending increases. And Poland has dramatically increased its military spending, too, since 2014.

“Certainly tensions between Russia and the West are higher now than at any point since the end of the Cold War,” said Chausovsky, the Stratfor analyst, adding that the demise of Cold War-era arms control treaties increases the risk “for further military buildups and associated security challenges” in Europe.

In February, the U.S. suspended its obligations under the 1987 Intermediate-Range Nuclear Forces Treaty, claiming that Russia had been developing and deploying missiles in violation of the pact’s limits for years. Moscow denied any violations and announced it was likewise suspending participation in the Cold War treaty.

Still, with fewer weapons pointing in either direction today compared with during the Cold War era, the odds of an accidental conflict are lower, said Donald Stoker, a national security expert who is a former professor of strategy and policy at the U.S. Naval War College.

“There is always plenty of room for things to go wrong,” Stoker said. “But there were many more chances for accidents during the Cold War.”