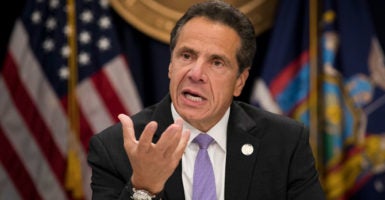 The utility Consolidated Edison put a moratorium on new natural gas hookups across parts of Westchester County, including Mount Kisco, site of the Democratic governor’s residence, according to The New York Times.

Con Edison’s decision is no surprise to energy experts critical of Cuomo’s blocking of major gas pipelines and banning of hydraulic fracturing, or fracking, in New York.

“Gov. Cuomo has been mandating the Green New Deal dream in New York, and now it’s turning into a nightmare for people forced to pay twice as much for oil heat instead of natural gas,” Daniel Kish, a distinguished senior fellow at the Institute for Energy Research, a free market group, told The Daily Caller News Foundation.

Local officials and businesses worry that Con Edison’s decision will derail major development projects that rely on natural gas for heating. It also means homes looking to get off relatively expensive heating oil will have to wait.

“It’s just a question of how people are going to be able to heat their homes and cook their food with the energy that’s available right now,” Con Edison spokesman Michael Clendenin told the Times.

The natural gas moratorium was announced in January and went into effect March 15, sparking a rush to get applications for natural gas hookups filed before it was too late.

Cuomo banned fracking in 2014 after years of study and delay. Cuomo said the risks to New York’s groundwater and public health were too great, despite Pennsylvania moving ahead with extracting oil and gas from shale.

In the years since, the Cuomo administration has blocked major natural gas pipeline projects. At the same time, however, natural gas was becoming an increasingly important part of New York’s electricity and heating mix.

Cuomo’s policies have made environmental activists happy, and he’s not done yet. The governor is in the midst of pushing his own “Green New Deal” plan to put more solar and wind power onto the grid.

However, most of New York’s electricity comes from natural gas and nuclear power. Also, millions of households rely on natural gas for heating during winter.

Pipelines are needed to get natural gas to customers, energy companies say, and there aren’t enough to reliably meet demand, especially during harsh winters.

Con Edison said Cuomo’s policies have chilled construction of new pipelines in the region. Two counties in Massachusetts also have had moratoriums on natural gas hookups since 2014 due to a lack of pipelines.

“The market changed,” Clendenin told the Times. “Investors were no longer willing to take the risk.”

The pipeline bottleneck in New York also put pressure on New England states that heavily rely on natural gas. Harsh winter conditions in recent years brought the region’s grid to the brink, including during the winter of 2017-2018.

“The Northeastern states are cutting their own throats, and their leaders are doing it with a green knife,” Kish said.

“The current issues these localities are facing are a result of poor planning by the utilities,” Cuomo spokesman Dani Lever told the Times. “Con Edison never even proposed new infrastructure or alternative solutions that would have adequately met increased demand for certain products prior to announcing its moratorium.”