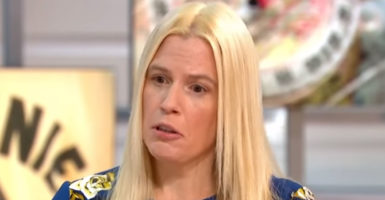 Caroline Farrow, a U.K. journalist and commentator who is Catholic, says she came under police scrutiny for “misgendering” a transgender woman in tweets. (Photo: Screenshot from "Good Morning Britain"/ITV)

A Catholic journalist in the United Kingdom faces legal trouble and potential jail time for “misgendering” a 25-year-old transgender woman.

Caroline Farrow, the journalist, said Monday that the mother of the transgender woman had reported her for the offense.

“Had a message from Guildford police tonight about my tweets following an appearance on [‘Good Morning Britain’] with Susie Green and Piers Morgan,” Farrow said in a tweet. “Susie Green has reported me for misgendering her daughter.”

Guildford is a town in Surrey, England, about 25 miles southwest of London. Morgan is one of the hosts of “Good Morning Britain,” a television show on the ITV network that originates from London.

Farrow, a broadcaster, media commentator, and public speaker who has appeared on BBC and Sky News, said that all she was told by police after she went on “Good Morning Britain” in September is that she “made some tweets misgendering Susie Green’s child and that I need to attend a taped interview.”

Green, the mother of the transgender woman, defended transgender rights during the “Good Morning Britain” episode.

“Trans girls are far more at risk of abuse, prejudice, and we know that from the statistics around self-harm and suicide,” Green said.

The Daily Signal sought comment from Farrow, but did not receive a response by publication time.

In a series of tweets, Farrow said she does not remember what she wrote on Twitter following the TV appearance more than five months ago, but that police said those tweets were illegal and they would arrest her if she did not appear for the taped interview.

“I don’t even remember said tweets,” Farrow said. “This was in September! But I really [did] not … give a flying toss. I have done nothing wrong, nothing illegal and will happily do jail time for my right to say that people cannot change sex.”

Under the U.K.’s Malicious Communications Act, a person may face up to two years in prison, a fine, or both if found guilty of “a message which is indecent or grossly offensive,” “a threat,” “information which is false and known or believed to be false by the sender,” or “any article or electronic communication which is, in whole or part, of an indecent or grossly offensive nature.”

Farrow cited her Catholic faith as the reason why she believes her perspective on gender has been taken as controversial.

“I have pointed out to the police that I am a Catholic journalist/commentator and it is my religious belief that a person cannot change sex,” Farrow said. “That we are in the middle of a national conversation about what it means to be male and what it means to be female.”

Farrow’s husband, Robin, is a Catholic priest who she says converted from Anglicanism after their marriage. They have five children.

She said on Twitter that her family has faced attacks because of her traditional view of gender.

Greg Scott, media director at The Heritage Foundation, told The Daily Signal in an email that Americans should take note of the incident.

“Americans shouldn’t be deceived into thinking that ‘it can’t happen here,’” Scott said. “Speech policing and the suppression of ideas disfavored by governments overseas are a grim picture of what’s to come in America if we ignore the looming threat.”

The same authoritarian worldview that has led to the potential arrest of a Catholic journalist in the U.K. is what underlies America’s state and local [sexual orientation and gender identity] laws and the so-called Equality Act, which was recently introduced in Congress. These laws and ordinances have been used as weapons to cleanse the public square of opposing opinions and punish people who resist demands to adopt government-mandated views of controversial social issues.