Amid This Immigration Crisis, Border Patrol Deserves a Break 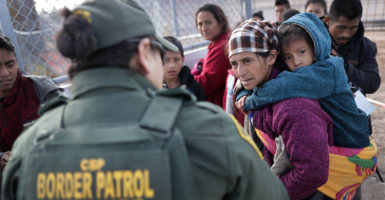 A U.S. Border Patrol agent takes Central American immigrants into custody after they crossed the U.S.-Mexico border on Feb. 1 in El Paso, Texas. The migrants, who said they were from Guatemala, turned themselves in to Border Patrol agents, seeking political asylum in the United States. (Photo: John Moore/Getty Images)

A new report from the U.S. Border Patrol proves that only the willfully ignorant can doubt that we’re dealing with an immigration crisis.

Border Patrol agents apprehended more than 66,000 migrants at the U.S.-Mexican border in February. That’s the highest total for a single month in almost a decade.

The makeup of the migrant population has changed as well. It used to consist primarily of single men from Mexico. Now it’s more likely to be families and children, arriving by the busload from Guatemala.

In February 2017, families and unaccompanied children made up 27 percent of those arrested or deemed inadmissible at the southern border. Two years later, it’s 62 percent.

Why the change? According to immigration expert David Inserra, loopholes in U.S. immigration law are the culprit. Combined with a weak asylum process, they “are creating incentives for adults to use children as pawns to get into the U.S.,” he writes in The Wall Street Journal.

Consider the unintended consequence of the Trafficking Victim Protection Reauthorization Act of 2008. It requires the Border Patrol to treat unaccompanied alien children from countries other than Mexico differently. Border Patrol turns them over to the Department of Health and Human Services and lets them enter the U.S. pending an immigration court hearing—one that may be years in the future.

“Many alien children are reunited with their families, who are often in the country illegally as well, and never heard from again,” Inserra writes.

It took time for word of this provision to spread to prospective migrants. The number of unaccompanied children crossing the border rose gradually for several years, then spiked in 2014. Yet even after President Barack Obama called this an “urgent humanitarian situation,” Congress didn’t act.

Another loophole is more recent: a 2016 court case that requires the Department of Homeland Security to release all children, including those accompanied by parents, from custody. Detaining the entire family is, by law, off the table.

So when a family is arrested crossing the southern border, officials have two choices. One is to release the child while detaining the parents as their request for asylum is processed. But this so-called family separation is naturally unpopular, which leads to the second choice: Release the entire family and hope they show up at an immigration court hearing.

Spoiler alert: Most of them don’t.

They aren’t the only ones who fail to show up when and where they’re supposed to. U.S. law ensures that aliens who enter illegally aren’t promptly removed—they’re entitled to get a ruling on their asylum claims first. So there’s been a spike in asylum claims by those who say they face a “credible fear” of prosecution.

It’s not hard for most of them to pass their initial hearing, but the immigration court system that is supposed to give them a final ruling has a backup that averages two years. What happens in the meantime?

“Most then simply disappear into the U.S.,” writes Inserra. “Some become victims of human trafficking or gangs. Few are ever removed from the country.”

Now you can see why proponents of a border wall often stress the need for “immigration reform.” Because while a border wall is a necessary component—one that will certainly help control the tide of illegal immigration—it’s actually part of a larger solution.

It doesn’t make much sense to build a wall while we continue to leave untouched laws that are drawing huge numbers here in the first place.

So as we pursue a better physical barrier, let’s also change the law to reduce these unhelpful incentives—and give the Border Patrol a much-needed break.