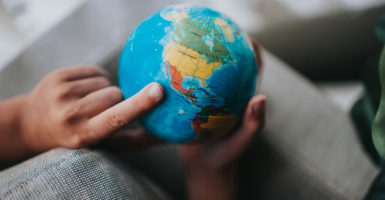 Given the constantly reiterated left-wing charge that opposition to massive immigration is racist and xenophobic, it is important to restate the truth: The reason for opposition to mass immigration into the United States—from almost anywhere in the world, whether legal or illegal—has nothing to do with race or ethnicity.

The issue is entirely one of values. Every immigrant, to anywhere, brings a set of social, moral, political, and religious values. No one on earth is devoid of values, be they noble, ignoble, or merely confused.

Wishful-thinking conservatives and Republicans have long argued that Latinos are potential Republicans because at heart they are social conservatives. They are said, for example, to oppose abortion and to have a strong commitment to the traditional nuclear family.

Yet, even assuming Latinos’ overall opposition to abortion and strong belief in the mother and father-led family, this has paled in significance compared to Latinos’ belief in big government.

That the state should take care of people is now the most widely held belief in the world.

More people believe in big government than believe in the God of the Bible. That is one reason, as I frequently note, that the most dynamic religion of the last hundred years has not been Christianity or Islam, but leftism.

That is one reason Democrats want more and more immigrants—more or less from anywhere (except Western Europe). Almost every immigrant is another vote for the Democratic Party. The only exceptions are some Europeans who crave individual liberty, and people fleeing socialist and communist dictatorships, such as those of the Soviet Union, Cuba, and Venezuela.

First-generation Cubans became a bedrock of the Republican Party in Florida. So, too, first-generation immigrants from the Soviet Union and Eastern Europe formed a strong conservative block. And today, one suspects most Venezuelans allowed to immigrate to the United States would find American millennials’ love affair with socialism ludicrous.

However, in every case, the words “first generation” are operative. Once the children of first-generation immigrants from left-wing tyrannies attend American colleges (or, increasingly, American high schools), they are likely to become left-wing Democrats. Their parents’ horrific experience with big government—nearly always meaning left-wing government—becomes irrelevant to them.

Take, for example, Sergey Brin, a co-founder of Google. Brin, about the 10th-richest man in the world, with an estimated net worth of $50 billion, was born in the Soviet Union, which he and his family fled, immigrating to the United States when he was 6 years old.

Yet he is a man of the left who now censors PragerU videos and other conservative content and plays a major role in making Silicon Valley the closed left-wing world it is. Though his family fled the Soviet state, Soviet values have apparently influenced Brin more than American values have.

So, whether immigrants bring big-government values with them or embrace them within a generation, few immigrants of the last generation either brought American values or embraced them for long after coming here.

Nor is it only a belief in big government that nearly all immigrants bring with them. For example, many Muslim immigrants from the Middle East and North Africa bring with them a value that permeates the societies from which they came—anti-Semitism. Witness the two newest Muslim members of Congress: Ilhan Omar, D-Minn., who came from Somalia, and Rashida Tlaib, D-Mich., whose parents are Palestinian.

The problem with mass immigration into America has nothing to do with ethnicity or race. It is entirely about values.

The proof is this: The problem is the same with “internal” immigration. New Yorkers immigrating to Florida and Californians immigrating to Texas and Arizona do to those states what Latin Americans do to America: They bring different values—specifically, left-wing values, starting with belief in big government.

Next time someone labels your opposition to mass immigration “racist” or “xenophobic,” tell them you are equally opposed to New Yorkers immigrating to Florida and Californians immigrating to Arizona.

And for the same reason: They bring with them the very values that caused them to flee. The only difference is Latin Americans are largely unaware of what they are doing; New Yorkers, Californians, and other leftists who move to conservative states know exactly what they’re doing: voting for the government policies from which they fled.