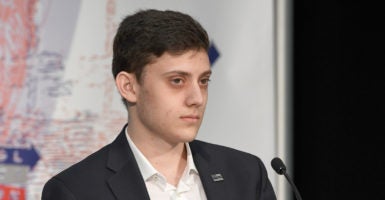 “Every single level of government knew this could happen," Kyle Kashuv, 17, says at CPAC of the school shooting a year ago in Parkland, Florida. Pictured: Kashuv speaks during Politicon 2018 last Oct. 20 at the Los Angeles Convention Center. (Photo: Michael S. Schwartz/Getty Images)

Instead of looking to government for protection and security, Americans should work to preserve and strengthen Second Amendment rights, a student who became an activist after last year’s school shooting in Parkland, Florida, told hundreds of conservative activists Thursday.

“What happened at Parkland wasn’t a gun issue,” Kashuv said during a session on gun control at the Conservative Political Action Conference, or CPAC, just outside Washington.

Kashuv, 17, pointed to statistics that show crime rates have declined as gun ownership has gone up.

He also expressed frustration that law enforcement officials received multiple reports about earlier behavior by the young man responsible for the shooting, but did nothing.

“Government failed at all levels,” Kashuv said. “Every single level of government knew this could happen. I’m targeting individuals who allowed this to happen. A gun is an inanimate object without someone pulling the trigger.”

Kashuv, who has met with President Donald Trump and first lady Melania Trump as well as congressional leaders, expressed concern that his generation could be beguiled into accepting the premise of gun control arguments.

“Quite frankly, it’s not looking good,” he said. “If we don’t go out and fight for the Second Amendment, we could lose out. The statistics back us up, and Trump did a phenomenal job in getting those two justices on the court. But we have to make sure these gun control bills don’t get passed.”

Hudson, the North Carolina congressman, told the audience that Democrats “are perpetuating a fraud on the American people” by pushing new gun control legislation that “would do nothing to protect the American people and would not have prevented the shootings” at the Florida school.

Okafor gained national recognition in 2015 when she played a key role in passing a concealed carry law applicable to college campuses in Texas.

Walters asked her what motivated her to become such an ardent supporter of Second Amendment rights. She replied that her activism started about nine years ago, when she became a Christian.

“It was then that I realized the importance of life, the right to life, and the opportunity to live,” Okafor said. “We need to empower women with firearms; that’s the greatest equalizer.”

Kashuv said he hopes that high school and college students become more familiar with statistics, including those showing that in the past 20 years the homicide rate has declined by 49 percent while gun ownership climbed by 56 percent.

These numbers suggest that more guns actually can lead  to less crime, he said.

CPAC, the largest annual national gathering of conservative activists, runs through Saturday at the Gaylord National Resort and Convention Center in National Harbor, just outside of Washington.