3 Reasons Medicare for All Would Hurt Americans 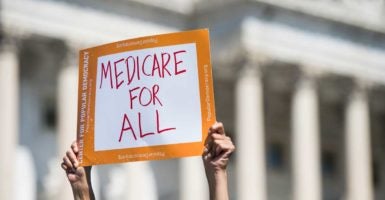 House Democrats introduced a plan to bring "Medicare for All" on Wednesday. (Photo: Bill Clark/Contributor/Getty Images)

House Democrats released their plan to bring “Medicare for all” to the country Wednesday.

There’s one upside: T this proposal progressives are now being more open about what they plan to do to the American health insurance market.

They intend to make private health insurance a thing of the past as they move the country toward government-run health care.

But is this what Americans really want? While the promise of “free” health care is enticing to many, we should remember the old axiom that “there is no such thing as a free lunch.”

As Dr. Marilyn M. Singleton, an anesthesiologist and health care expert, wrote for Fox Business: “Proponents of government-sponsored health care say people want it. But a 2019 Kaiser Family Foundation survey found that enthusiasm wanes when folks are told they would (1) lose their private insurance, and/or (2) pay more taxes and/or (3) have longer waits.”

All these things are part of the cost of “free” health care for everyone.

While more details regarding this legislation will be coming out in coming days now that it has been released, here’s three things Americans will have to endure if we transform our health care system through Medicare for All.

Medicare for All proposals usually start off by telling you what you will get from government, but rarely mention the things that will be taken away.

This turned out to be so egregiously wrong that the generally left-wing PolitiFact labeled it the “Lie of the Year” in 2013.

But Medicare for All will be worse.

As economist and Heritage Foundation visiting fellow Stephen Moore wrote for Investor’s Business Daily last October, Medicare for All means that if you like your health plan, you will lose it—guaranteed. Even proponents of the House bill acknowledge this.

“I think this ‘Medicare for all’ bill really makes it clear what we mean by ‘Medicare for All,'” said the bill’s lead sponsor Rep. Pramila Jayapal, D-Wash., according to NBC News. “We mean a complete transformation of our health care system, we mean a system where there are no private insurance companies that provide these core comprehensive benefits that will be covered through the government.”

At least they are being honest about it this time.

Government-run health care is expensive, really expensive, but that cost won’t just be paid by printing money and taxing a handful of rich people.

An analysis from Charles Blahous at the Mercatus Center estimated that the cost of Sen. Bernie Sanders’ Medicare for All plan would be about $32.6 trillion over 10 years. It’s hard to put such an astronomical sum into personal perspective, but Blahous tried to give a sense of what this would mean in reality: doubling all federal individual and corporate income taxes.

It’s these types of costs that have spooked even wealthy, deep blue states from passing such a plan. As even Sanders has admitted, if we pass Medicare for All, “there will be .”

But that pain won’t just come through higher taxes, it will also come through funneling the massive single-payer system through the government.

We already have something like this: The Department of Veterans Affairs.

Despite high praise from  Obama, its government-provided services have left a lot to be desired. Jonathan LaForce, a Marine, wrote in The Federalist about what awaits us if America adopts this system for everyone:

If you want long waits, even inside the doctor’s office, months before actually seeing a doctor about pressing issues, if you want faceless bureaucrats determining your life, if you truly in your heart of hearts think that somehow this is healthy and good, you go right on ahead …

If you want to see more babies wind up like Charlie Gard, you go right on ahead and do that damnably awful thing.

While Medicare for All promises to extend health insurance to everyone, it doesn’t guarantee actual medical care. If the American system turns out anything like the nationalized health care in other countries it will come with longer delays and poorer treatment.

Heritage Foundation health care expert Bob Moffit used research by the Journal of the American Medical Association to explain how the American system currently works compared to the ones in Great Britain and Canada:

Concerning access to specialized care, for example, they found that only 6 percent of American patients reported waiting more than two months to see a medical specialist, compared to 39 percent of Canadian patients and 19 percent of British patients. The Fraser Institute, a prominent Canadian think tank, estimated that in 2018 the median waiting time for a Canadian patient to see a medical specialist on referral from a general practitioner was 19.8 weeks.

Losing insurance, high taxes, and long wait times are just three of the many painful things that will come through a transition to Medicare for All. Perhaps Americans should think twice before embracing an idea that would fundamentally transform our health care system.