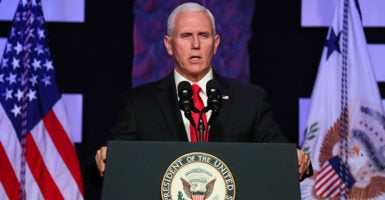 Vice President Mike Pence on Friday told a gathering of state governors that the Trump administration is working with Congress on what he called a “historic” infrastructure program that would both reduce red tape and provide more federal funding.

Addressing the governors at the vice presidential residence at the Naval Observatory in Washington, Pence did not specify a price tag for the infrastructure plan.

“I’ll make you a promise, and we’ll ask for your help, that in this Congress, we’re going to pass historic infrastructure legislation,” he said.

During the 2016 presidential campaign, then-candidate Donald Trump called for an infrastructure plan of about $1 trillion that would include public and private funding.

Such a project should not be a heavy burden on taxpayers, said Nick Loris, research manager for energy and the environment at The Heritage Foundation.

“If the Trump administration wants a legacy moment on infrastructure, it must include regulatory improvements that have long-lasting impacts on the way we build everything, from roads and bridges to pipelines and ports,” Loris told The Daily Signal.

“Unleashing the private sector and focusing federal spending strictly on projects that are federal in nature will ensure better stewardship of taxpayer money and meet the infrastructure needs of Americans across the country,” Loris added.

Governors from across the nation are in Washington this weekend for the winter meeting of the National Governors Association. Republican and Democratic governors associations concurrently are holding their respective gatherings in the nation’s capital as well.

Pence said the Trump administration has already given states more control over land management and allowed states to open up more natural resources to development, which should streamline construction projects.

The vice president said the infrastructure bill being drafted would cut red tape so states could build major projects, such as roads and bridges, faster and more efficiently.

He said the legislation is being discussed with congressional leaders from both parties, and asked the governors for their help in pressing lawmakers to act.

“We need your voices at the table about what those needs are,” Pence said.

Montana Gov. Steve Bullock, a Democrat and current chairman of the National Governors Association, struck a note of bipartisan optimism, noting that he had worked with Pence when the vice president was governor of Indiana.

“We’re encouraged, knowing that someone who sat in the governor’s seat continues to reach out to us, both when we agree and when we disagree,” Bullock said at the luncheon at the vice president’s residence. “Together, we can certainly jump-start the wheels of cooperative governing again.”

Later Friday, Arkansas Gov. Asa Hutchinson, a Republican, who has a $300 million infrastructure plan in his state, spoke of the need for federal assistance.

He said the vice president told him an infrastructure bill is “going to happen this year.”

“I hope that’s the case, but we’re tired of waiting for the federal government, in terms of infrastructure,” Hutchinson said at a Politico forum with the governors, held at Microsoft’s Washington headquarters, across the street from the Marriott Marquis hotel, where the governors conference is taking place.

“I say that respectfully, because I think that is something we ought to have bipartisan agreement on. We couldn’t wait. Their infrastructure bill will be patterned after matching funds from the states,” the Arkansas Republican said.

This story was corrected to attribute a comment to Nick Loris.