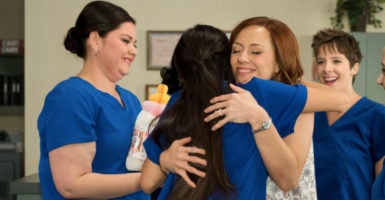 “Ironically, the MPAA seems to be indirectly endorsing the pro-life position: namely that abortion is an act of violence,” writers and directors Cary Solomon and Chuck Konzelman say. Pictured: A still from "Unplanned," which will be released March 29. (Photo: Courtesy "Unplanned" movie)

Movies are rated R for profanity, nudity, sex, or violence. “Unplanned” contains no profanity, nudity, or sex. “Ironically, the MPAA seems to be indirectly endorsing the pro-life position: namely that abortion is an act of violence,” writers and directors Cary Solomon and Chuck Konzelman told Movieguide.

She helped over 22,000 women have abortions during her time at the clinic. Planned Parenthood named Johnson as the employee of the year in 2008. She worked at the abortion provider for eight years before leaving the group. Johnson also had a medication abortion before she became pro-life.

The R rating will mean that “many teenage women in this country who can legally obtain an actual abortion without parental permission will be prohibited from going to see our film containing simulated images of abortion, without obtaining parental permission,” Solomon and Konzelman also said, noting the double-edged sword of the rating.

A parent or guardian, however, can accompany a child younger than 17 to an R-rated film.

“We are pushing the boundaries of what has never been before on such a wide scale by showing America exactly what abortion is—and abortion is disturbing. It’s violent,” Johnson said in a statement.

Johnson is the founder of pro-life group And Then There Were None, which helps abortion workers leave the industry. It also helps women who’ve had abortions and are suffering. The group was founded in 2012.

Since leaving Planned Parenthood, Johnson has helped roughly 500 former abortion workers leave their jobs and find other careers outside of the abortion industry. Seven of those workers were abortion doctors.

“No one will walk away from seeing this movie and say ‘I didn’t know,’” she added.