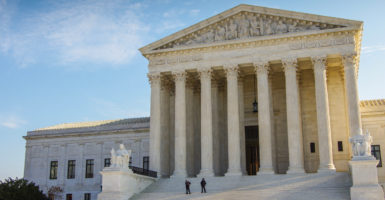 It’s a good day when all nine justices of the Supreme Court make a stand for liberty.

On Wednesday, the court held unanimously that the excessive fines clause of the Constitution’s Eighth Amendment applies to the states. The ruling is potentially a major win for property owners and individual citizens facing excessive fines, fees, and forfeitures—to say nothing of Tyson Timbs, the man who fought the seizure of his SUV all the way to the Supreme Court.

Timbs was arrested after selling $225 worth of heroin to undercover police officers on two occasions, and he pleaded guilty. He was sentenced to a year of home confinement and five years’ probation, and was ordered to pay approximately $1,200 in fees and court costs.

But then, Indiana moved to forfeit the car he was driving when he was arrested: a $42,000 Land Rover, which he had bought with money from his father’s life insurance policy.

The basis for this seizure was a practice called civil forfeiture, a law enforcement tool that lets police seize money or property that is alleged to have been used to commit a crime, or to be the proceeds of the crime.

Although in this case the state secured a conviction against Timbs, that is hardly the norm in civil forfeiture cases. Very often, law enforcement will seize assets of the accused without an actual conviction. This can be done in cases that are “in rem,” meaning  the property itself is the defendant, not the individual.

Under federal law and in most states, the owner of the forfeited property does not need to be charged or convicted to be permanently stripped of their home, car, or life savings.

These same laws also typically grant comparatively few due process protections to property owners, and allow law enforcement agencies to keep some or all of the resulting proceeds, and spend these funds with little oversight.

That financial incentive has led many agencies to treat forfeiture as a way to raise revenue, and because winning cases is relatively easy, governments often pursue forfeiture cases even when there is little evidence of actual criminal wrongdoing.

Timbs clearly committed a crime, but his case raised another issue: His SUV, which was seized as an instrumentality of that crime, was valued at more than four times the maximum criminal fine he faced under Indiana law.

Was this seizure an “excessive fine” in violation of the Eighth Amendment?

Two Indiana courts agreed that it was, but the state Supreme Court held that the clause had never been applied to the states, and therefore are not bound by it.

When first ratified, the Bill of Rights applied only to the federal government. Beginning in the 1920s, the Supreme Court began “incorporating” some of its protections against state governments through the due process clause of the 14th Amendment.

Prior to Timbs’ case, the Supreme Court had incorporated the Eighth Amendment’s two other clauses that bar excessive bail and cruel and unusual punishment, in Schilb v. Kuebel (1971) and Robinson v. California (1962), respectively. But the excessive fines clause had been left out—until now.

Writing for eight of the justices, Justice Ruth Bader Ginsburg’s opinion—announced on her second day back after a lengthy absence—held that “the historical and logical case” for incorporation was “overwhelming.”

In order to be incorporated against a state, a right under the Bill of Rights must be “deeply rooted in this [nation’s] history and tradition,” and “fundamental to our scheme of ordered liberty.”

As Ginsburg pointed out, “the Excessive Fines Clause traces its venerable lineage” back nearly a millennium, to Magna Carta in 1215 and later to the English Bill of Rights of 1689. Protection against abusive fines was universally understood to be a foundational right under English law—an understanding even the earliest colonists carried with them to the New World.

In fact, Ginsburg noted that by 1787, “the constitutions of eight [states]—accounting for 70 [percent] of the U.S. population—forbade excessive fines.” Today, every state prohibits excessive fines or requires they be proportional. The right against excessive fines is clearly a “deeply rooted” one.

But it is also fundamental to our free society. As the Supreme Court’s opinion notes, “[e]xorbitant tolls undermine other constitutional liberties.” History is replete with examples of this. From England’s Star Chamber to the Black Codes in the American South, arbitrary and excessive fines have been used time and again to undermine individuals’ basic civil rights.

Indiana, for its part, attempted to sidestep the broader issue of incorporation, arguing that the amendment “does not apply to its use of civil in rem forfeitures” because its application specifically to civil forfeiture “is neither fundamental nor deeply rooted.”

Indiana also asked the Supreme Court to overturn a prior case, Austin v. United States (1993), in which the justices unanimously recognized that civil forfeitures have historically been understood to act, “at least in part, as punishment.” Modern forfeiture practices share these punitive overtones, and so long as “in rem” forfeitures are at least partially punitive, they are “subject to the limitations” of the excessive fines clause.

First, the justices declined to overturn Austin v. United States. With that decision still in place, the protections it afforded under federal law must now be applied to the states in identical fashion.

Second, the justices held that incorporating rights through the 14th Amendment requires the Supreme Court to ask “whether the right guaranteed—not each and every particular application of that right—is fundamental or deeply rooted.” Thus, the Supreme Court need only show that the general right against excessive fines is fundamental, not whether there is a “deeply rooted” right against excessive civil forfeitures.

Justice Clarence Thomas concurred in the Supreme Court’s judgement, but disagreed as to its method for incorporating the clause. While the majority opinion relied on the due process clause of the 14th Amendment—something that many conservative and libertarian legal scholars have argued against—Thomas would have relied on the 14th Amendment’s privileges or immunities clause to incorporate the right against the states.

Justice Neil Gorsuch, in a short concurrence, shared Thomas’ sentiment that, as “an original matter” the privileges or immunities clause would be the better avenue for incorporation.

Thomas maintained that reading substantive rights into the due process clause is “oxymoronic” because due process “speaks only to ‘process’” or procedural protections. He observed that the Supreme Court’s substantive due process doctrine “allow[ed] the Court to fashion fundamental rights without any textual constraints … [such as in] the Court’s most notoriously incorrect decisions [including] Roe v. Wade [and] Dred Scott v. Sandford.”

Incorporating the excessive fines clause gives the victims of unjust property seizures a new avenue to recover their money or property in court. But its real impact won’t be known until the courts settle another important question: What is an “excessive” civil forfeiture?

That’s a question for another day, but hopefully Timbs v. Indiana will mark a turning point in a broader effort to rein in abusive property seizures by state and local governments across the nation.