Most Americans Can’t Pass a Basic Citizenship Test. Here’s Why We Should Be Worried. 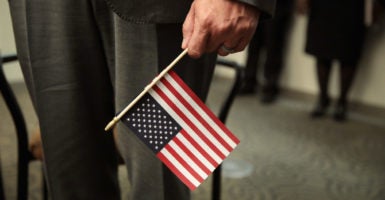 Can a nation survive ignorant of its past? We are testing that very question right now.

According to a recent survey by the Woodrow Wilson National Fellowship Foundation, most Americans would fail a basic citizenship test.

Axios published a roundup of how participants performed. The results weren’t good.

People did relatively well on the most basic questions. Seven out of 10 knew that Thomas Jefferson wrote the Declaration of Independence and that Franklin Roosevelt was president during World War II.

But only 43 percent knew that Woodrow Wilson was president during World War I (nearly one out of four thought it was Roosevelt), and only 56 percent knew which countries the U.S. fought in World War II.

Fewer than a third could correctly name three of the original 13 states.

More than six out of 10 incorrectly thought the Constitution was written in 1776. (It wasn’t written until 1787.)

For sure, immigrants have some advantages in taking this test over native-born Americans. After all, they are likely studying to pass it as their citizenship depends on it.

There are, of course, plenty of other important aspects of citizenship besides knowing history. Even more important are the very ethos and ideas that ground our founding documents: the Constitution and the Declaration of Independence.

It’s probably more consequential for our country, for instance, that the average citizen believes these documents to be fundamentally good, even if they don’t know what year they were written.

But the bottom line is this: Being ignorant of the past has real-world effects. It is inexcusable for Americans as a whole to be unaware of our past and the basic principles of our system of government.

It’s all the more concerning given our celebration of “democracy.” Some, like former President Barack Obama, have even proposed mandating that all Americans vote.

Is it not concerning that as knowledge of our system, more Americans are being called upon to partake in that system by voting? Does that not flatly contradict the idea that democracy is the highest good?

That’s certainly the idea being pushed by those who want to abolish the Electoral College.

Given the decline of America’s historic and civic knowledge, perhaps we should consider how we ended up here.

Last October I covered the results of an equally depressing survey, and my conclusion was the same then as it is now:

As citizens, knowledge of the past and of civics is crucial. Lacking such knowledge is unhealthy for a free country, and even dangerous, given how bad political life can become.

We need to fix this, for the sake of our republic.