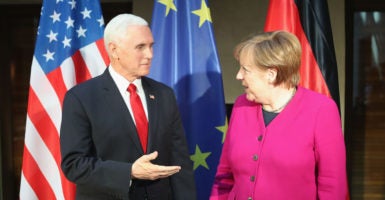 MUNICH—The annual Munich Security Conference opened Friday with the largest U.S. delegation in the five decades of its history. The conference has grown into one of the leading forums for discussion of international issues.

Included in the list of participants for the 2019 conference are numerous heads of state, among them German Chancellor Angela Merkel, Afghan President Mohammad Ashraf Ghani, and Egyptian President Abdel-Fattah el-Sissi.

In total, over 450 individuals attended the invitation-only event at the posh Hotel Bayerischer Hof in the old city center of Munich. Hundreds, perhaps thousands, of stern-looking polizei surround the hotel, discouraging passersby from loitering.

As The Heritage Foundation’s representative, I am here to attend the Losaich Group meeting, an annual gathering on the sidelines between the George C. Marshall Center, a Defense Department regional security center, and the Munich Security Conference. It focuses on enhancing the security partnership between the U.S. and Germany while promoting an enduring strategic dialogue between these essential partners.

Pence gave a strong opening address Friday. After mentioning some accomplishments of the Trump administration, he called on members of NATO to meet the goal for defense spending, saying that “many of our NATO allies still need to do more.”

And he’s right. As Heritage’s 2019 Index of U.S. Military Strength points out, only five of 29 NATO countries meet the standard to spend 2 percent of their gross domestic product on defense. However, there is progress: Most countries have at least announced plans to meet the goal by 2024.

Just like bitter medicine, it would be hard to say that Pence’s message was always warmly received. But it’s a message that needed to be delivered.

By contrast, Merkel’s remarks took a markedly different tone. She accused the Trump administration of weakening the international order, saying, as The Washington Post reported, that the “U.S.-led global order ‘has collapsed into many tiny parts.’”

Other countries also pushed back against Pence’s opening remarks. Iran’s foreign minister, Mohammad Javad Zarif, said Pence had “arrogantly demanded that Europe must join the United States in undermining its own security and breaking its obligations.”

Despite the near total lack of evidence, a consistent narrative claims that the Trump administration does not value the NATO alliance. None of that has been in evidence during this conference.

In fact, it has been countered by the reports of dozens of high-level meetings between other NATO countries and the U.S., during which U.S. officials affirm the necessity of NATO.

As Pence said: “When you hear President Trump ask our NATO allies to live up to the commitments they’ve made to our common defense, that’s what we call being leader of the free world.”

The Munich Security Conference serves a useful purpose in gathering leaders for three days of frank dialogue. One of the defining characteristics of the conference is the empty seats in the main hall as representatives leave to meet for one-on-one talks in side halls and rooms.

We’re lucky the U.S. budget stalemate ended so that the U.S. could be so well represented.