Right Side of History: How Abortion Became a ‘Positive Good’ to Proponents 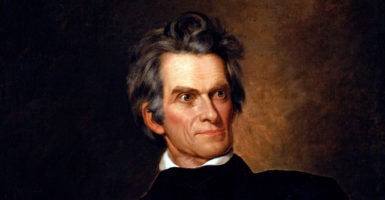 On this week’s episode, hosts Jarrett Stepman and Fred Lucas interview Kyle Sammin, a lawyer and writer from Pennsylvania, who recently compared the shifting philosophy of pro-abortion proponents to those who defended slavery in the early 19th century.

Sammin explains how a social situation, slavery, once treated as an unfortunate evil, was turned into a “positive good” by John C. Calhoun, a prominent Southern statesman, and why that matters to the abortion debate today.

Sammin wrote in an article for The Federalist:

Comparing abortion to slavery is only meaningful if we can learn something from it. Sadly, the course of the 19th century’s great debate does not foreshadow a simple end to our current dispute. It is a mistake to say that our Civil War was inevitable, but once the Slave Power began to embrace slavery as a positive good, once they began to see it as an end in itself and not merely the means to achieve financial comfort, the two sides were no longer aiming at the same eventual result. A negotiated solution became a lot less likely.

You can read the rest of Sammin’s article here.