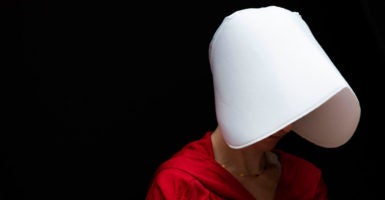 A woman dressed as a character from the novel-turned-TV series "The Handmaid's Tale" walks through the Hart Senate Office Building as Supreme Court nominee Brett Kavanaugh begins the first day of his confirmation hearing on Sept. 4, 2018. (Photo: Jim Watson/ AFP/Getty Images)