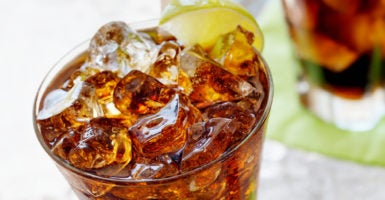 The U.S. Court of Appeals for the 9th Circuit, well-known for its liberal leanings, helped deliver the blow to those big-government proponents.

The court granted a preliminary injunction blocking enforcement of the city and county of San Francisco’s Sugar-Sweetened Beverage Warning Ordinance.

The ordinance applies to ads for sugar-sweetened beverages (e.g. sodas) on billboards, trains, stadiums, and other outlets. It doesn’t apply to packaging, among other things.

These ads are required to include the following statement that must cover at least 20 percent of the ad:

WARNING: Drinking beverages with added sugar(s) contributes to obesity, diabetes, and tooth decay. This is a message from the City and County of San Francisco.

The full panel of the 9th Circuit held that the plaintiffs (the American Beverage Association, the California Retailers Association, and the California State Outdoor Advertising Association) “will likely succeed on the merits of their claim that the Ordinance is an ‘unjustified or unduly burdensome disclosure requirement [that] might offend the First Amendment by chilling protected commercial speech.’”

The entire ordinance is a prime example of some people using the force of government to influence what they think other people should eat and drink.

The 20 percent size requirement for the warning is so large that it would dominate any ad and act as a way to discourage any sugar-sweetened beverage advertisements.

Even San Francisco’s own expert provided support for a much smaller size requirement, as the court pointed out in its opinion.

This ordinance would effectively be forcing companies to pay for a public service announcement that helps push the agenda of San Francisco’s leaders.

The required warning is both misleading and inaccurate. It suggests that any added sugar contributes to health problems.

There is no clarification that the “dose makes the poison.” In other words, even assuming added sugar was a real concern, the problem would be having too much added sugar.

There is also a complete lack of respect for the complexity of diets. An individual can drink sodas and still have a healthy diet, with little sugar (or added sugar) intake across their complete diet. The warning label would suggest otherwise.

The entire “added sugar” issue itself is misleading. It is simply sugar that has been added to food. This attack on added sugar simultaneously diminishes any message about overall sugar consumption, and could give the impression that having a lot of natural sugar is perfectly fine.

Also, as explained by Christen, “San Francisco’s compelled message is problematic because it suggests that sugar is always dangerous for diabetics. In fact, consuming sugar-sweetened beverages can be medically indicated for a type 1 diabetic when there are signs of hypoglycemia, a complication of type 1 diabetes, because drinking fruit juice or soda raises blood sugar levels quickly.”

San Francisco and its leaders are arbitrarily demonizing a narrow group of products (sugar-sweetened beverages) and then forcing producers of those products to convey controversial, misleading, and inaccurate information about their own products.

San Francisco isn’t warning about a safety risk, but trying to socially engineer the personal dietary choices of its residents.