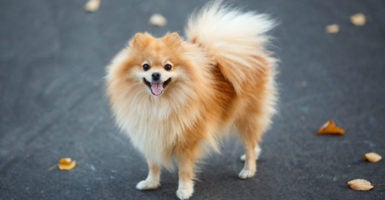 Animal abuse is already a crime in every state, and 46 states take the issue so seriously that they have made it a first-time felony offense. (Photo: TatyanaTitova/ Getty Images)

A pair of congressman from Florida announced Jan. 23 they would be introducing a bill in Congress that would make it a federal crime to abuse and torture animals.

Reps. Ted Deutch, a Democrat, and Vern Buchanan, a Republican, said those convicted of the crime would face a maximum of seven years in federal prison.

“This is commonsense, bipartisan legislation to bring some compassion to our animal laws,” Deutch said.

“For many Americans, animal welfare is an important policy issue, and the idea of animal abuse is abhorrent,” he explained.

Yes, it is important, and yes, it is abhorrent—but common sense? Not so much.

Protecting animals is a laudable aim, but this bill would take federal law too far to accomplish that end.

The Preventing Animal Cruelty and Torture (PACT) Act would make it a federal crime to crush, burn, drown, suffocate, or impale an animal or otherwise subject an animal to serious bodily harm if those acts take place on federal property or affect interstate commerce.

By criminalizing animal abuse that “affects interstate commerce,” the bill would unnecessarily interject the federal government into an issue that belongs primarily in the realm of state and local law enforcement.

In the process, the bill would spread already strained federal resources even thinner by tasking federal authorities with policing local neighborhoods and communities for animal abusers.

The fact is, animal cruelty is already illegal in every state, and local police ably enforce those laws.

While the federal government has a compelling interest in policing animal abuse on federal property, the federal government should not be in the business of “bear[ing] down on the distinctively local concern of crimes against Fido, too,” as scholars at The Heritage Foundation argued two years ago while discussing a similar bill.

The Pet and Women Safety Act of 2017, if it had passed, would have made it a federal crime to harass or intimidate a pet in a manner that causes “substantial emotional distress” to the owner.

As the Heritage scholars stated, “While no one condones violence against any [animal], common sense and principles of federalism in law enforcement suggest that the clear and compelling federal interests to pursue gangs, cartels, and the like do not as clearly apply to hunting down animal abusers.”

Crimes like arson, carjacking, and animal abuse are serious offenses, but they are generally local in nature. Needlessly involving the federal government only continues the alarming trend toward the overfederalization of crime—a symptom of the overcriminalization phenomenon.

For many years, Heritage scholars have cautioned that overfederalization wastes government resources because it tasks federal law enforcement authorities with policing local crime, distracting federal officials who ought to be focusing their efforts on truly national concerns (see here, here, and here).

Former U.S. Attorney General Edwin Meese III, the leading Heritage scholar on the issue of overfederalization, explained more than 20 years ago that the federalization of crime “invites selective prosecution, and disparate enforcement and punishment. Federal officials determine, usually on the basis of political factors, whether they will get involved in a case.”

Rather than trying to solve every problem in local communities, the federal government makes best use of its resources by protecting Americans from far greater threats posed by human traffickers, violent drug cartels, cybercriminals, and terrorist organizations, to name a few.

Congress’ efforts to intervene in matters of state and local concern also greatly expand the federal government’s police power; that is, the authority of the government to regulate the safety and well-being of citizens, which is a power reserved to the states by the federal Constitution.

As that happens, then-Supreme Court Chief Justice William Rehnquist observed in 2000, the distinction between national and local government is obliterated in favor of a “completely centralized government” incompatible with the Constitution’s “dual system of government.”

The PACT Act’s broad attempt to criminalize animal abuse on land not owned by the federal government would only further obliterate that distinction, and it would do so for no clear reason.

Animal abuse is already a crime in every state, and 46 states take the issue so seriously that they have made it a first-time felony offense.

What’s more, those laws are being actively enforced.

In Pennsylvania, a former kennel owner, with a previous animal abuse conviction, last week pleaded guilty to more criminal charges of animal abuse in violation of that state’s law.

To be sure, one could envision instances of animal abuse that might warrant federal intervention on land not owned by the federal government, such as illegal dogfighting rings that involve organized crime. But here again, federal law (see here and here) already prohibits these activities.

For instance, no new federal laws were needed to take down former NFL quarterback Michael Vick, who pleaded guilty in 2007 to violating federal law for operating a dogfighting ring on his privately owned property in Virginia.

Vick spent 23 months in federal prison for his crimes.

Congress’ overfederalization of crime is a troubling trend that accelerated decades ago, leaving our federal government with resources spread too thin and the states with less power.

As I have written elsewhere, it’s easy to understand why the trend has continued apace: “Politicians like creating new criminal law[s] because it is an especially easy way for [them] to drum up political support, [as] it gives the public a sense that ‘something is being done’ about crime.”

The PACT Act is another bill that gives Americans that sense that Congress is “doing something” about crime. Unfortunately, once again, it is doing all the wrong things.