This Bill Would Drag the Federal Government Into Disputes Over Pets 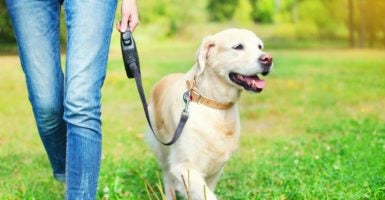 One provision of H.R. 909 would make it a federal crime to harass or intimidate someone's pet in a way that causes “substantial emotional distress.” (Photo: iStock Photos)

Congress has written some laudable policies into the Pet and Women Safety Act of 2017 (H.R.909) that are designed to protect domestic violence victims from “trauma caused by acts of violence or threats of violence against their pets.”

There is one provision of the bill, however, that takes a familiar step too far: It would create a federal crime to harass or intimidate any person’s pet in a way that causes “substantial emotional distress.”

Given the threats from cyberattacks, interstate and international crime cartels, terrorist groups, drug trafficking, and the criminal aspects of immigration issues, the resource-constrained federal law enforcement community does not need to bear down on the distinctly local concern of crimes against Fido, too.

Make no mistake, we’re dog lovers. But the federal government has no business embroiling itself in such local conduct that is best addressed by the states.

The Pet and Women Safety Act of 2017 currently boasts 196 co-sponsors, and it is easy to see why. Individuals who commit domestic abuse (which is a federal crime) often engage in similar behaviors on their victims’ pets (which is a crime in many states).

There are reports describing how victims will stay in abusive relationships to safeguard their animals, and experts attribute that behavior to the fact that very few domestic violence shelters permit animal companions—one of the many policies that Congress now seeks to change through grant funding.

The most obvious trouble with the Pet and Women Safety Act, however, is the potentially broad criminal penalties that it seeks to extend.

It would extend these penalties by amending the interstate stalking statute (18 U.S.C. 2261(A)) to include any emotionally distressing intimidation of a “dog, cat, bird, rodent, fish, turtle, horse, or other animal that is kept for pleasure rather than for commercial purposes.”

It is also hard to see why this is necessary to effectuate the legislators’ broader goals expressed in this bill.

While no one condones violence against any pet, common sense and principles of federalism in law enforcement suggest that the clear and compelling federal interests to pursue gangs, cartels, and the like do not as clearly apply to hunting down animal abusers.

That is not to say that animal abuse should go unpunished. In fact, it already is a crime in virtually every state, as one can quickly see from online resources such as the Animal Law Resource Center’s state law database.

In some places, depending on the manner of abuse, it can be a crime several times over. And harassing, injuring, or killing a pet is exactly the kind of crime that belongs within the purview of state and local police.

Congress has seized broad legislative power through the Commerce Clause in Article 1, Section 8 of the U.S. Constitution to regulate matters that were traditionally state and local concerns.

Supreme Court Chief Justice William Rehnquist wrote in United States v. Morrison (2000), however, that Congress’ interstate commerce power “‘must be considered in the light of our dual system of government.”

It “may not be extended” to activities, like pet harassment or even killing pets, whose effects on interstate commerce “are so indirect and remote that to embrace them” through federal legislation “would effectually obliterate the distinction between what is national and what is local and create a completely centralized government.’”

In Morrison, the court held that the Commerce Clause did not authorize Congress to provide federal civil remedies for domestic violence assaults under the Violence Against Women Act. Rehnquist wrote for the majority that “under our federal system that remedy must be provided by the [states], and not by the United States.”

The same is true of stalking and harming pets.

This bill is clearly not the first time that Congress has carried a worthy goal too far and needlessly dragged federal criminal law enforcement down the proverbial rabbit hole.

Evidently, the bill’s supporters never stopped to think long enough to realize the obvious: that flamethrowers are rarely, if ever, used to commit crimes, and that whatever criminal conduct they might be used to perpetrate, such as murder or arson, are already punishable under multiple federal criminal laws as well as the criminal codes in every state.

They also failed to account for the fact that more people die annually from bees, vending machines, and champagne corks than flamethrowers. Fortunately for the farmers, roofers, and other workers who use these devices for lawful business purposes, that bill quickly went up in flames.

That is not always the case.

After a rash of carjackings and particularly heinous related crimes—like the carjacking and murder of Pamela Basu in Baltimore in 1992—Congress responded to the national media outcry by quickly passing a federal carjacking law. The point then, as it is now in the Pet and Women Safety Act, was to protect the victims.

But years later, federal prosecutors rarely focused on such crimes. Enforcement was left largely to the states, just as it was before the 1992 tragedy.

Edwin Meese III argued in 1998, federalizing crimes like carjacking “invites selective prosecution, and disparate enforcement, and punishment. Federal officials determine, usually on the basis of political factors, whether they will get involved in a case.”

The same would be true of pet abuse. “So really what we need in this country,” Meese continued, “is a much better and clearer balance and distribution of responsibility between federal and local law enforcement. What we really need are some statesmen who are willing to stand up and say, ‘Let’s not make a federal case out of this.’”

Indeed, not every problem needs a federal solution. Congress should not make a federal case out of intimidating or harassing pets.