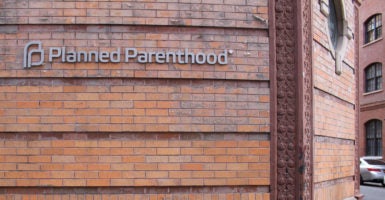 Over 900 babies are being aborted every day by Planned Parenthood. (Photo: Stephanie Ott/Picture Alliance/Getty Images)

Our team has updated our annual analysis of Planned Parenthood’s culture of death to give you the facts on what is being done with your tax dollars. The bottom line? Over 900 babies are being aborted every day by Planned Parenthood.

In fiscal year 2017, Planned Parenthood increased abortions by over 11,000 over the previous fiscal year, while its other services for women have consistently decreased.

Planned Parenthood also continues to tout the myth that abortion is only 3 percent of the “services” it provides. But a quick review of the numbers reveals that this is false. Planned Parenthood committed 332,757 abortions in 2017-2018 and saw 2.4 million people, and if the abortions were given to individual patients, then 13 percent of all its patients received abortions.

While Planned Parenthood downplays its abortion statistics, it often highlights its non-abortion services by counting multiple services to a single client as separate services. What was actually only 3 percent was its services to keep babies alive—prenatal services.

Even though Planned Parenthood is the nation’s largest abortion supplier, and even though it traffics baby body parts and covers up the sexual abuse, it continues to get funding for political reasons and hide behind the shadow of doing “health care” to increase its funding eligibility.

Here’s the facts: Over the last eight years, cancer screening and prevention programs have consistently decreased by 66 percent, breast exams have declined by over 64 percent, and prenatal services have steadily dropped by 77 percent.

As abortions have gone up, and services to women have gone down, its government funding has increased. Planned Parenthood received $563.8 million in combined federal, state, and local government grants and contracts in fiscal year 2017. That’s an increase of over $20 million from the previous year’s funding. On top of that, Planned Parenthood reported an excess of revenue over expenses of $244.8 million, an increase of $146.3 million in a year alone.

There’s no reason to continue to support an organization that profits off of taking innocent life while providing a steady decrease in the genuine “health care services” that the government originally gave it taxpayer money to do in the first place.

Of all funding received by Planned Parenthood, 34 percent comes from taxpayers’ pockets. These government grants and contracts funded by our tax dollars can and should be put to better use. Our consciences know it, and the numbers prove it.

And, oh, by the way, the 2017-2018 report also shows $802.6 million in unrestricted net assets, funds which Planned Parenthood can use should it lose its government funding.