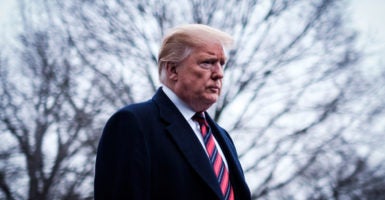 “Nick Sandmann and the students of Covington have become symbols of fake news and how evil it can be,” President Donald Trump says. (Photo: Pete Marovich/Getty Images)

President Donald Trump stated on Tuesday that the Covington Catholic High School boys who were portrayed as the villains in a now-debunked media narrative have become a symbol of fake news.

“Nick Sandmann and the students of Covington have become symbols of fake news and how evil it can be,” Trump tweeted. “They have captivated the attention of the world, and I know they will use it for the good—maybe even to bring people together.”

Sandmann, along with his high school classmates, were attending a school-sponsored trip to the March for Life on Friday. The all-male group of students were standing in front of the Lincoln Memorial waiting for a bus to take them home to Kentucky when a now-viral incident occurred.

A short video quickly went viral showing the boys laughing and chanting around a small group of Native American protesters, including a man named Nathan Phillips.

Phillips went on to news shows later that weekend claiming the students mocked him with racist insults and pro-Trump chants.

The boys, who were wearing Make America Great Again hats, were quickly dubbed the “MAGA hat kids” and the incident was characterized as a racially-motivated attack.

However, a longer video was released that corroborated the students’ accounts of events and debunked Phillips’ statements, a narrative that the news media largely ran with.

The full-length video showed that the high schoolers did not mock or insult the group of Native Americans, but rather, a black supremacist group known as the Black Hebrew Israelites approached the students, calling them derogatory names.

“It started off unpleasant,” Trump continued. “But can end in a dream!”