‘We All Agree … Every Life Is Sacred’: Bipartisan Group of Lawmakers Speaks at March for Life 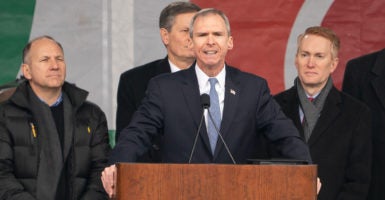 "We’re all here because we all agree on one thing: Every life is sacred and needs to be protected," says Rep. Dan Lipinski, D-Ill., at the March for Life. (Photo: Jeff Malet for The Daily Signal)

Both Democrat and Republican lawmakers spoke at the rally preceding the 46th annual March for Life.

“We have all kinds of ideas on all kinds of different issues,” said Rep. Dan Lipinski, D-Ill. “We don’t agree on everything. We have Republicans, independents, Democrats.”

“But we’re all here because we all agree on one thing: Every life is sacred and needs to be protected.”

Rep. Katrina Jackson, a Democrat state lawmaker from Louisiana, addressed the bipartisan efforts of pro-life legislation and said Louisiana was the top pro-life state in the country. When questioned about her pro-life position as a black female Democrat, Jackson said, she responds, “Because I am a Christian first.”

Throughout Jackson’s speech, she chanted “We fight” and the crowd finished the statement with “for life.”

Pence, who was joined by his wife Karen, urged the participants to “stand strong.”

“To all gathered here today: We urge you to stand strong,” Pence said. “Be prepared to give a reason for the hope that you have. Be prepared to defend life. But do so with gentleness and respect.”

“They will attack you,” he added. “They will question your hearts to silence others. But don’t listen to them. Listen to the truth.”

Smith said, “The shocking number of unborn children killed in America is unconscionable: 2,500 each day, approximately 61 million dead babies since 1973—a death toll that equates with the entire population of Italy.”

He also sounded a warning note about House Democrats.

“The new Democratic majority in the House has made it clear that they wanted to eviscerate all pro-life protections, including the Hyde [Amendment banning] taxpayer funding {of] abortion, which has saved over 2 million lives since it’s been enacted,” Smith said.

Daines brought up his career experience when talking about his convictions.