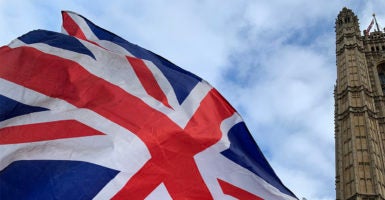 If Prime Minister Theresa May decides to cling to her position after Tuesday's Brexit defeat, or if a new leader takes the helm of the Conservative Party, the best course of action for Great Britain would be to move forward with a “no deal” Brexit, under which there is a complete separation from the European Union. (Photo: Gail Orenstein /NurPhoto/Getty Images)

British Prime Minister Theresa May has suffered a seismic defeat. The House of Commons on Tuesday rejected her proposed withdrawal agreement with the European Union by a 230 vote margin.

Among those voting against her: 118 rebel Conservative MPs who saw the deal as a weak-kneed surrender to the European Union.

This is the biggest defeat suffered by a U.K. prime minister in a major vote in modern times. Doubtless it will prompt immediate calls for May to step down.

If she does resign, there would be a Conservative Party leadership race, with a new prime minister in place within weeks.

Labour leader Jeremy Corbyn has already called for a vote of no confidence in the government, but is unlikely to succeed, as the Democratic Unionist Party is committed to keeping the Conservative government in power.

Whatever the fallout from the vote, it should emphatically sink the prime minister’s poorly negotiated agreement with the European Union, which would tie Britain indefinitely to the EU Customs Union.

If May decides to cling on as prime minister, or if a new leader takes the helm of the Conservative Party, the best course of action for Great Britain would be to move forward with a “no deal” Brexit, under which there is a complete separation from the European Union.

A “no deal” scenario would place Britain completely outside the EU’s Customs Union and Single Market, with no transition period. Britain would trade with the EU under World Trade Organization rules. Meanwhile, it would be free to fully control its borders and negotiate and sign free trade agreements with nations across the world.

A “no deal” Brexit is the best path forward to ensure that Britain is a truly free sovereign nation, able to shape its own destiny on the world stage. It is also a plus for the United States.

A “sovereign Brexit” would provide a tremendous impetus to a U.S.-U.K. free trade agreement, advancing economic freedom on both sides of the Atlantic and further enhancing the special relationship between the world’s largest and fifth-largest economies.

Such a deal already enjoys strong support from the Trump administration and on Capitol Hill. It could be in place by the end of 2019.

In June 2016, 17.4 million Britons voted to retake control of their own country from the European Union. The vote was the greatest blow for liberty and self-determination on the world stage in many decades.

Brexit is already firmly written into legislation passed overwhelmingly by Britain’s Parliament. It is due to begin on March 29.

A successful Brexit, based upon a truly sovereign Britain, will be great for Britain, for Europe, and for the United States. In 73 days’ time, the American and British people should celebrate a historic moment that will bring the United States and United Kingdom closer together.