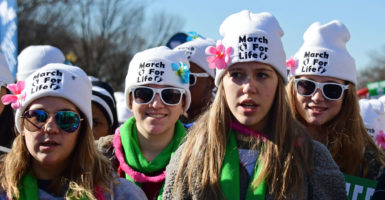 A poll released Tuesday just ahead of the 46th March for Life demonstration in Washington, D.C, shows the majority of Americans support tighter restrictions on abortion, and would even like to see the landmark Roe v. Wade decision “reinterpreted” to allow more restrictions.

The annual survey conducted by Marist in partnership with the Knights of Columbus, a Catholic fraternal organization, reveals that three-quarters of Americans oppose taxpayer funding for abortion abroad, even though 55 percent of Americans polled identify as pro-choice.

Additionally, 75 percent of Americans—including those who identify as Republican (92 percent), Democrat (60 percent), and independent (78 percent)—said abortion should be limited to the first three months of pregnancy.

“As in past years, this poll shows that the pro-choice label on the abortion issue is simply insufficient,” said Knights of Columbus CEO Carl Anderson in a statement.

“The majority of Americans—in both parties—support legal restrictions on abortion,” Anderson added. “Two-thirds of Americans want Roe revisited to allow for state regulation of abortion or to ban it altogether. The majority of the American people deserve to have their opinions heard.”

Now in its 11th year, the poll, which randomly selected and surveyed 1,066 American adults about their opinion exclusively on abortion, found that 83 percent of Americans agree that laws can protect both the health and well-being of a woman and the life of the unborn.

“The abortion landscape in terms of where Americans are is substantially different from what you might glean from the way the debate sometimes plays out in terms of an all-or-nothing scenario,” said Andrew Walther, vice president of communications and strategic planning at the Knights of Columbus.

Additionally, the findings show that between 2008 and 2019 the percent of Americans who identify as pro-life and pro-choice bounced between 40 and 60 percent. For this reason, said Marist Poll Director Barbara Carvalho on a call with reporters, the terms surrounding the debate mischaracterize and oversimplify Americans’ opinions on abortion.

With 3 in 4 Americans in support of substantial restrictions on abortion, “the American public is more in line with the March for Life than the Women’s March regarding abortion,” Carvalho added.

The Women’s March is schedule for Jan. 19, immediately following the March for Life.