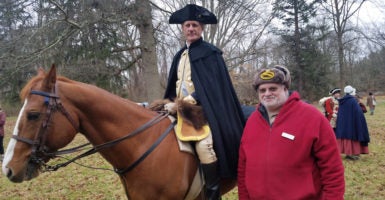 John Koopman III portrays Gen. George Washington in a Dec. 30 re-enactment of the Battle of Princeton. With him is Roger Williams of the Princeton Battlefield Society. (Photo: Kevin Mooney/The Daily Signal)

PRINCETON, N.J.—Before Gen. George Washington entered the battlefield with reinforcements on the morning of Jan. 3, 1777, members of the Pennsylvania militia fired off two cannons to halt the advancing British troops.

What Washington needed most 242 years ago was for the militia to delay the bayonet-wielding British soldiers operating under the command of Lt. Col. Charles Mawhood.

So historical interpreters and colonial-era re-enactors told The Daily Signal and crowds of onlookers during a real-time tour Dec. 30 at Princeton Battlefield State Park.

“Those cannons were critically important,” re-enactor Brandon Aglio explained as he posed beside one of the 3-pounder guns used in the re-enactment. “This is because the British were on offense and the cannon fire halted their advance, giving Washington the time he needed to organize the additional American troops that were coming onto the field.”

About 200 local residents and out-of-town visitors attended the tour, which included a re-enactment of the battle.

The actual fighting began at about 8:15 a.m. that Jan. 3, when British and American forces exchanged musket fire across a range of about 40 yards in an orchard on the William Clarke farm. The British initially outnumbered the Americans and had the upper hand, but this would change after Washington arrived.

The battle ended about 9:30 a.m., when British redcoats surrendered after barricading themselves in Nassau Hall on the grounds of what is now Princeton University. 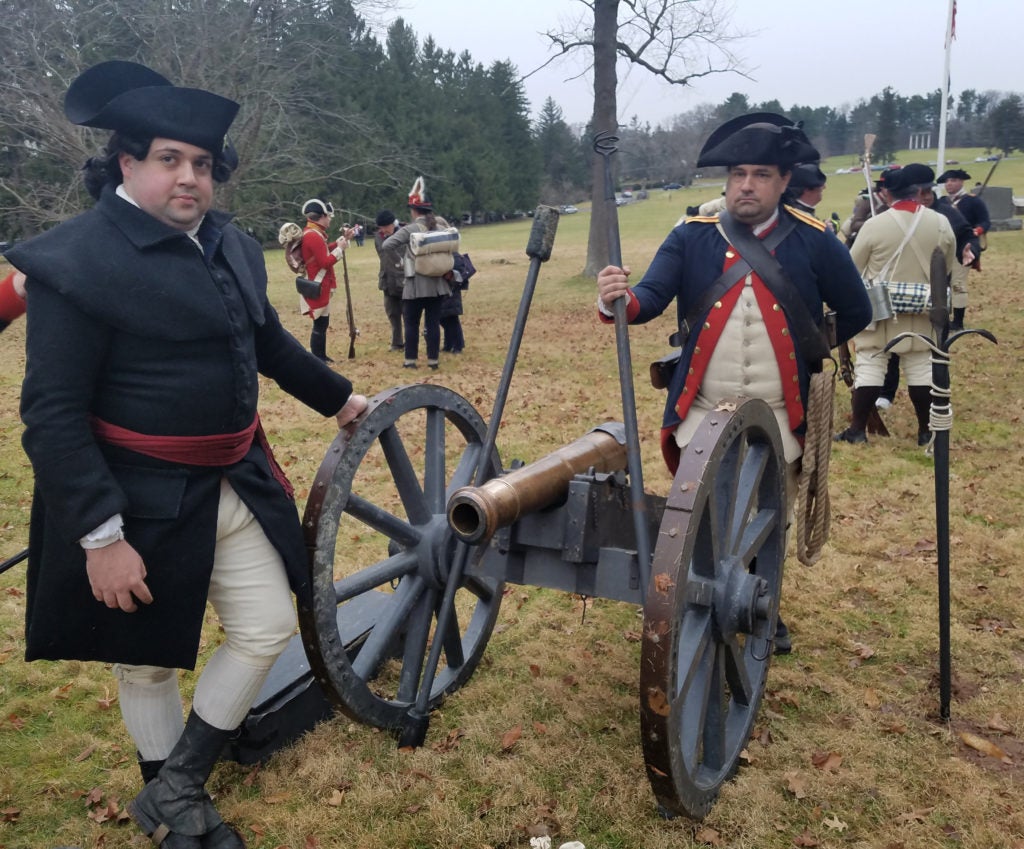 Aglio, 31, of Newport, Rhode Island, was joined by fellow re-enactor Joshua Mason, 23, of Ticonderoga, New York. Both men helped portray the 2nd Battalion Artillery of Philadelphia Associators, which was under the command of Capt. Joseph Moulder.

Since Pennsylvania was ruled by Quakers, who were pacifists, residents who wanted to fight for their new country could not officially join the Continental Army. So they formed their own militia group, which became known as the Philadelphia Associators.

“They were a group of gentleman volunteers who held their line against the British at a critical moment when the battle could have been lost,” Aglio said. “They were very skilled at loading and firing the cannons, which had a range of about 1,000 yards.”

Aglio, a tour coordinator and library assistant for the Redwood Library and Athenaeum in Newport, said he has participated in re-enacting historic events for 12 years.

“Artillery was so important to the Battle of Princeton, it was necessary to portray them,” Aglio said in a later email to The Daily Signal. “This is [my] second time having the honor of portraying that particular impression.”

“We are talking about grapeshots that would disperse when fired, and they could hit several targets at roughly the same time,” Mason said, adding:

The British had bayonets at the beginning of the battle, the Americans did not. The Philadelphia Associators are remembered for what they did because those cannons were critical, and Associators were able to fire one round each minute and helped to turn the battle.

Mason, who works as the museum education coordinator at Fort Ticonderoga in upstate New York, said he became a re-enactor while a high school freshman.

“What initially attracted me to it was the uniforms and the thrill of the mock battles,” Mason said in a later email to The Daily Signal.  He added:

Ten years later, it’s still the little details like the uniforms that help motivate me, but the real driving force to hand-stitch uniforms and travel across the country is the chance to educate and encourage folks to learn more about the past and how it continues to impact America today and for generations to come. 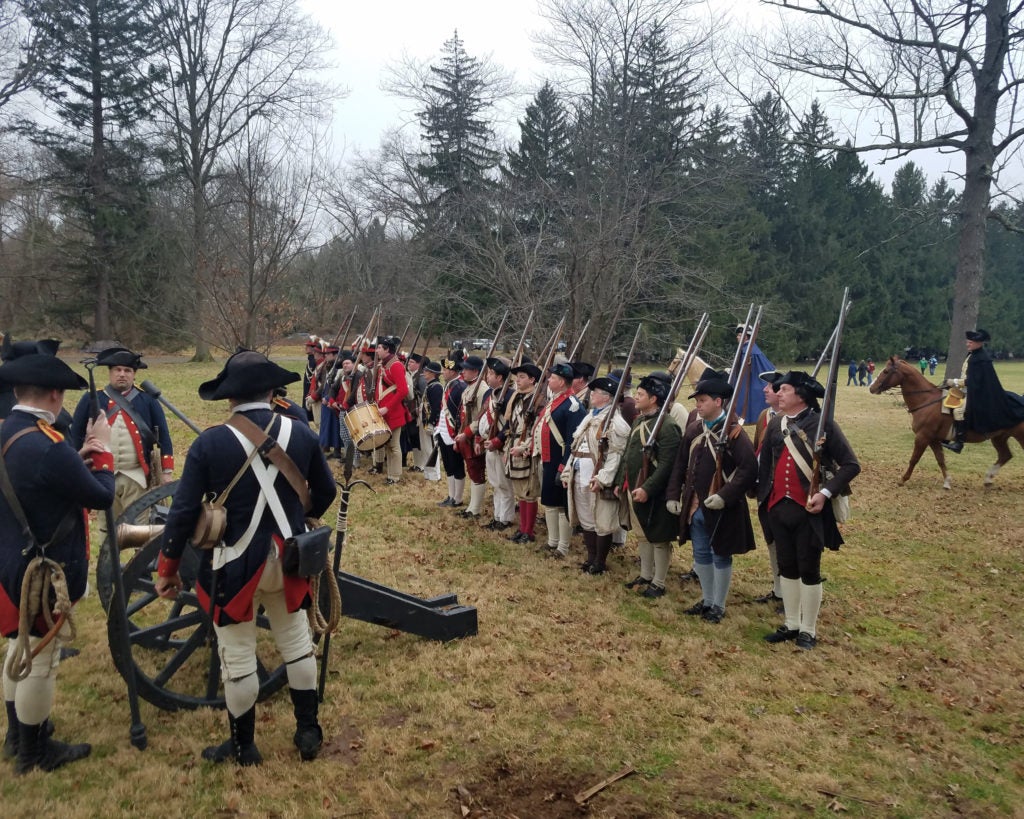 Re-enactors form up as they represent soldiers in Gen. George Washington’s Continental Army.

Horses also had their place on the battlefield.

John Koopman III, a resident of Colchester, Connecticut, who played the part of George Washington, made this point while discussing the general’s personal role in the counterattack.

Koopman, author of the historical novel “George Washington at War–1776,” rode on horseback throughout the day and led the reinforcements from the Continental Army against Mawhood’s British troops in a part of the battlefield known as Maxwell’s Field, just as Washington did on that cold January morning in 1777.

“There are some horses that can never be used with re-enactments because they will be frightened by the cannon fire and the musket fire,” Koopman said. “But there are others who recognize it as a game and know they will not get hurt.”

The Battle of Princeton marked the culmination of the “10 Crucial Days,” which began with what became known as Washington’s crossing of the Delaware River on Christmas night 1776, continued with the two battles of Trenton, and ended at Princeton.

“Without the 10 Crucial Days, the American Revolution certainly would have been over,” Koopman said. “Washington had written a letter to a cousin at Mount Vernon where he said the game was up unless something dramatic happened. But Washington was a bit of a gambler and he himself would even say that he was a gambler.” 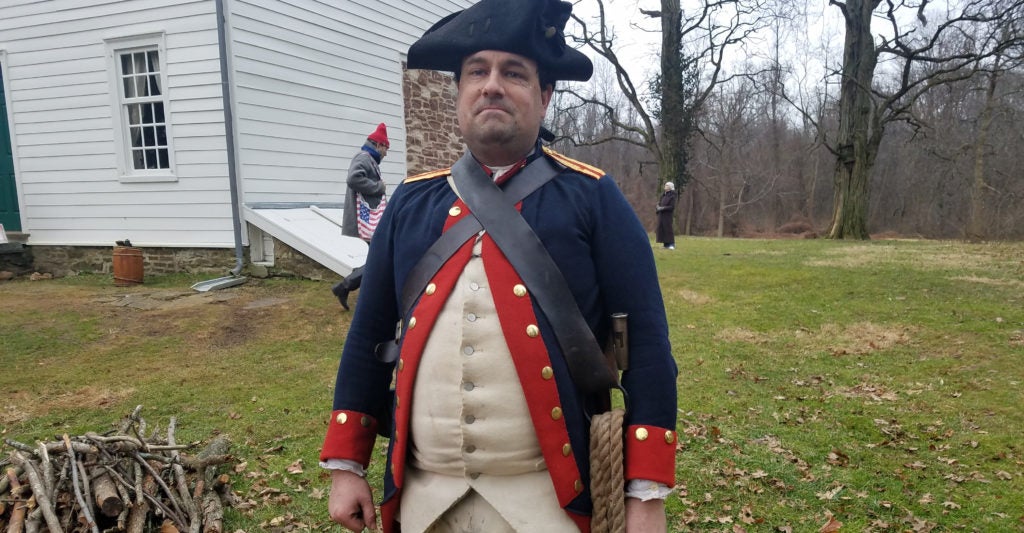 “They were a group of gentleman volunteers who held their line against the British at a critical moment,” re-enactor Brandon Aglio says.

When the battle started in and around the orchard, Brig. Gen. Hugh Mercer, serving under Washington, had about 120 men from his brigade while Mawhood had about 450, according to historical records cited in David Hackett Fischer’s book “Washington’s Crossing.”

Mercer had an additional 200 men from his brigade positioned a few hundred yards behind the 120 soldiers who charged into the orchard. By the time the Pennsylvania militia, the Delaware Light Infantry, the Philadelphia Red Feather Company, and colonial Marines arrived to reinforce Mercer’s brigade, Fischer estimates, the Americans had about 1,500 troops, or three times the size of Mawhood’s forces.

Mercer died after the battle from multiple bayonet wounds inflicted by British soldiers, who thought they had captured Washington. He was left for dead near a white oak tree that became known as the Mercer Oak, according to historical accounts.

Because Moulder’s Philadelphia Associators positioned two 4-pounder cannons on high ground, however, Washington had time to organize reinforcements from the Continental Army into a counterattack against British positions. Retreating soldiers followed Washington’s lead and re-engaged the British.

“Parade with us, my brave fellows!” Washington is said to have called out, “and we will have them directly.”

Mawhood ordered a retreat as the American forces surged ahead. 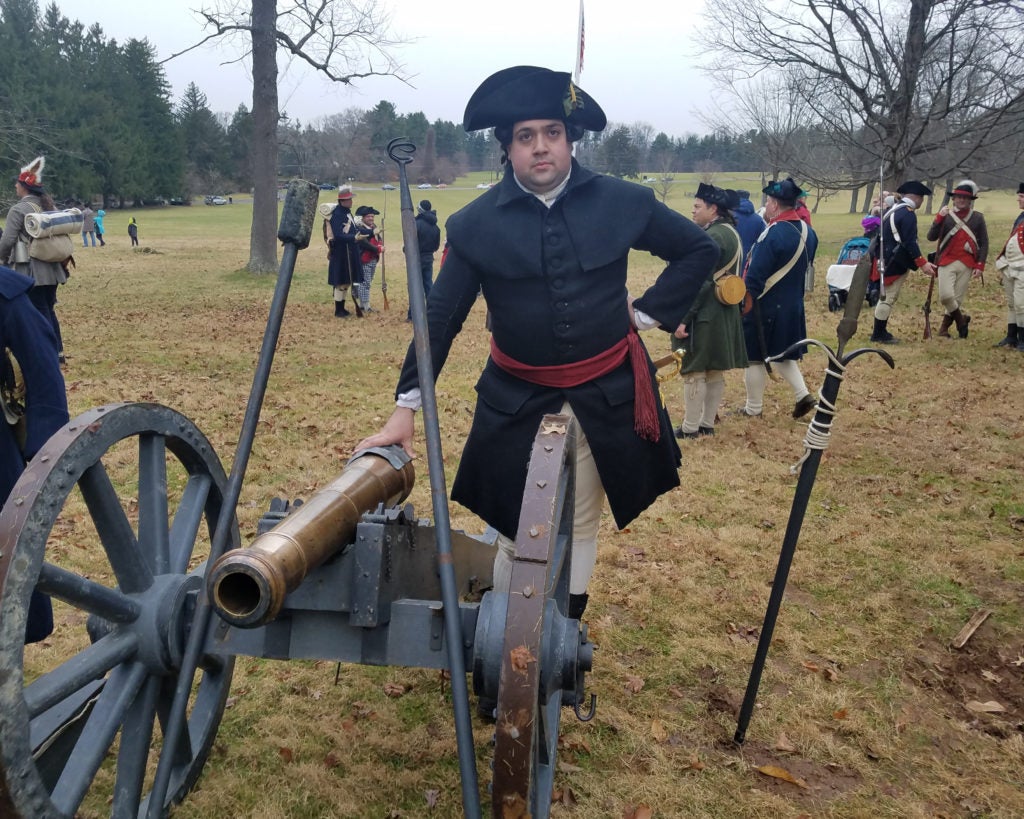 “We are talking about grapeshots that would disperse when fired, and they could hit several targets at roughly the same time,” re-enactor Joshua Mason says of the Americans’ cannon fire during the Battle of Princeton.

Alexander Hamilton, the future secretary of the treasury who served as an artillery commander under Washington, forced the British to surrender after firing cannon balls on Nassau Hall, where the remaining British soldiers had taken refuge.

“The Battle of Princeton was never supposed to have happened,” Larry Kidder, an area historian and author, said during a lecture preceding the re-enactment. “In the 18th century, battles would typically be fought in the summer or fall, and heat would usually be a problem, and not the cold.”

Kidder, author of the upcoming book “Ten Crucial Days: Washington’s Vision for Victory Unfolds,” told listeners that Washington “visualized a row of dominoes” that began with his Christmas night crossing of the Delaware in 1776 and continued with his surprise attack on the Hessian garrison in Trenton amid bad weather.

The Second Battle of Trenton, also known as the Battle of Assunpink Creek, was fought Jan. 2, 1777. The series of skirmishes along what is now Route 206 prevented the British from reaching Trenton until nearly nightfall. Washington slipped behind enemy lines that night and attacked the British in Princeton the next day.

Roger Williams, a historical interpreter with the Princeton Battlefield Society, told The Daily Signal that this earlier battle should be linked with what occurred in Princeton.

“It’s called the Second Battle of Trenton, but I really see it as the first battle of Princeton because it’s part of the same campaign,” Williams said. “The strategy was to draw the British down to Trenton where Washington had defensible positions. This created a Bunker Hill feeling for the British, because the Americans had the high ground.” 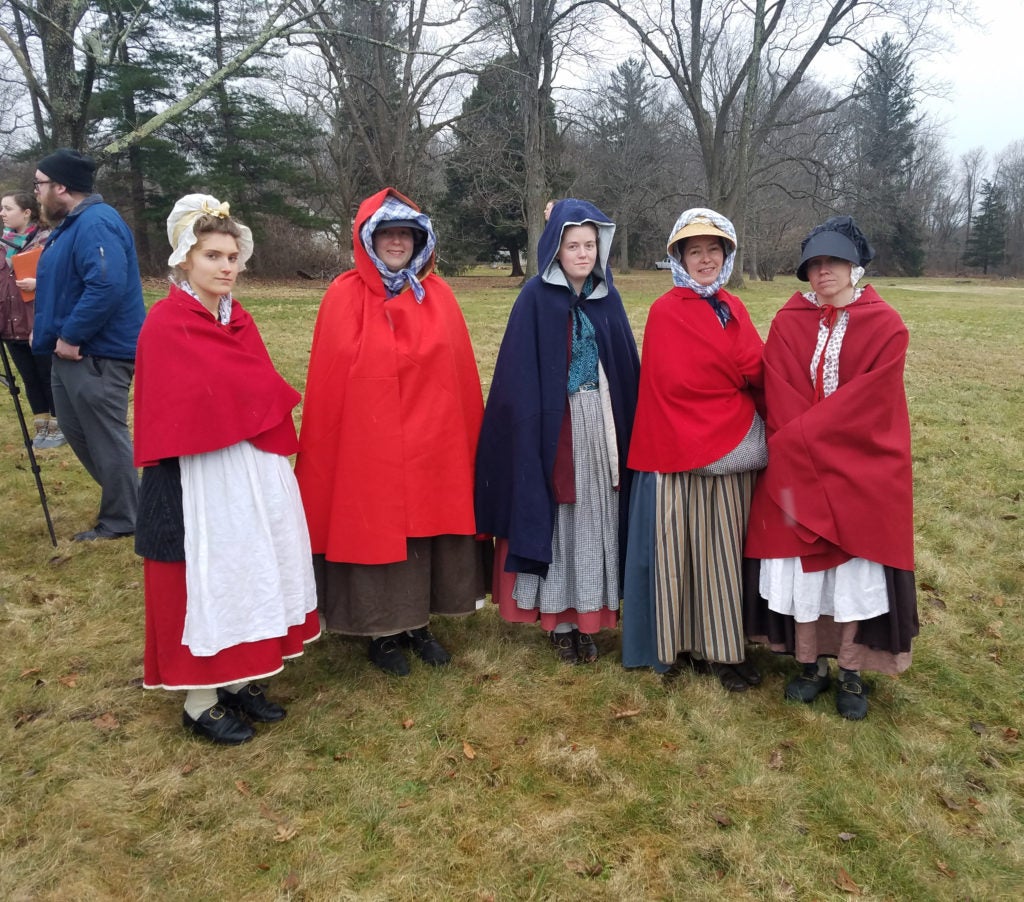 Brave women provided support on the battlefield, and they are represented by, from left, Margaret Morra and Juliana Goodwin for the Continentals and Elisabeth Harmor, Carrie Fellows, and Jenna Dean for the British.

The Princeton Battlefield Society, a nonprofit group founded in 1970 for the purpose of preserving the battlefield, had been involved in a long-running legal dispute with the Princeton-based Institute for Advanced Study over the institute’s plans for new faculty housing.

The society objected to the institute’s proposed residences because they would have intruded on part of the battlefield where Washington arrived on horseback, Jerry Hurwitz, president of the group, said in an interview.

The matter was resolved last May. The institute, an independent postdoctoral research center, and the American Battlefield Trust closed on the trust’s $4 million purchase of 14.85 acres near Princeton Battlefield State Park.

The newly acquired land, which eventually will be conveyed to the state of New Jersey as an addition to the park, includes roughly two-thirds of the Maxwell Field property. It also includes a 1.1-acre tract to the north that historians identify as a key part of the battlefield, according to a report the trust provided to The Daily Signal.

As part of the agreement, the Institute for Advanced Study adjusted the size and scope of its housing project.

The American Battlefield Trust is a nonprofit, nonpartisan organization dedicated to preserving battlefield lands associated with the Revolutionary War, the War of 1812, and the Civil War. To date, it has protected more than 50,000 acres of battlefield land.

“This was a compromise and we did get the majority of the land. The ultimate goal here is to restore the battlefield,” Hurwitz said, adding:

What happened here was remarkable. The two armies were like ships passing in the night, one marching up to Princeton and another down to Trenton. It’s also only because one of the British soldiers saw the glint of sunlight on one of the American muskets in the early morning that the two armies met on the battlefield. This was not a planned battle, but Washington accomplished everything he wanted by capturing Princeton.

This report has been modified to include more information and quotes from re-enactors Brandon Aglio and Joshua Mason.