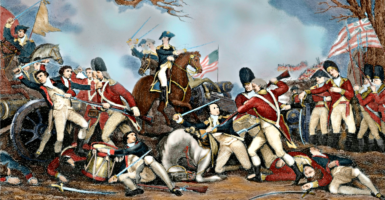 An oil painting by American artist John Trumbull depicts the fatal wounding by bayonet of Brig. Gen. Hugh Mercer, center, at the Battle of Princeton on Jan. 3, 1777. It conflates events by showing Gen. George Washington—on a brown horse rather than the white one he rode—arrive to rally the American troops to victory before he actually did. (Photo: Newscom)

PRINCETON, N.J.—What began as a retreat from battle-hardened, bayonet-wielding British soldiers 240 years ago, Gen. George Washington reorganized into a counterattack after arriving with well-armed reinforcements in a place known as Maxwell’s Field.

This battleground in Princeton, New Jersey, is where the U.S. War of Independence reached a critical turning point.

“Parade with us, my brave fellows!” Washington is said to have called out to his troops, “and we will have them directly.”

A tall and imposing figure even by today’s standards, Washington was “an easy mark for any British soldier” while mounted on his white horse, historian David Hackett Fischer recounts in his book “Washington’s Crossing.” But the British didn’t hit Washington. He rallied two broken brigades back into offensive positions, where they concentrated musket fire on British soldiers and forced them to clear the field.

The end result was a major victory for the Continental Army on Jan. 3, 1777, that would reignite the American Revolution. Historical records show that Washington’s maneuvers on Maxwell’s Field turned the tide of the battle at a moment when the British appeared to have the upper hand.

Here in the 21st century, another critical date has come to pass in the history of Maxwell’s Field.

The Institute for Advanced Study, an independent postdoctoral research center, and the Civil War Trust, a nonprofit based in Washington, D.C., devoted to the preservation of America’s battlefields, issued a joint press release Dec. 12 that came as a relief to historians and conservationists.

The Institute for Advanced Study, founded in 1930 and located in close proximity to the Princeton Battlefield State Park, announced it has agreed to downsize and reconfigure a proposed housing project for faculty. Local historians had said the faculty residences would have intruded upon that part of the battlefield where Washington arrived on horseback.

While the Civil War Trust primarily focuses on the protection of Civil War battlefields, it also works to preserve battlefields associated with the Revolutionary War and the War of 1812 through what it calls the Campaign 1776 initiative.

Under the agreement, the Civil War Trust will pay $4 million to purchase almost 15 acres of land from the Institute for Advanced Study. The acquisition includes about two-thirds of Maxwell’s Field and another 1.12-acre tract where part of the battle was fought.

The Civil War Trust said it plans to transfer the land to the state of New Jersey so it can be added to the Princeton Battlefield Park.

The Princeton Battlefield Society, a nonprofit group founded in 1970 for the purpose of preserving the battlefield, had sought to halt the housing project by filing a federal lawsuit against the Institute for Advanced Study under the Clean Water Act.

In response to the compromise, though, the historic preservation group issued a statement announcing it will suspend litigation pending the outcome of the agreement, which must be approved by the Princeton Planning Board and the Delaware and Raritan Canal Commission.

The sale of the property is scheduled to close at the end of June 2017.

“We didn’t know how our litigation would have turned out,” Jerry Hurwitz, president of the Princeton Battlefield Society, said in an interview with The Daily Signal, adding:

While we would have preferred to see more of Maxwell’s Field preserved, it’s also possible we could have lost everything, which is why we are pleased with the agreement. This is the site where Washington’s leadership was so critically important. He actually rode out ahead of his own troops and was only about 30 paces from the British lines. It’s unusual for a general to do this. “This is the site where Washington’s leadership was so critically important,” says Jerry Hurwitz, president of the Princeton Battlefield Society. (Photo: Jerry Hurwitz Facebook)

The Battle of Princeton marked the culmination of the “10 Crucial Days” that began with what became known as Washington’s crossing of the Delaware River on Christmas night 1776, continued with the two battles of Trenton, and ended at Princeton.

Alexander Hamilton, who served as an artillery commander in the Continental Army under Washington, forced the British to surrender after firing cannon balls on Nassau Hall on the grounds of Princeton University, where the remaining British soldiers had taken refuge.

“What stands out from Princeton is the personal role George Washington played in turning the tide of a battle that could have easily been lost,” Hurwitz told The Daily Signal, explaining:

The major fighting took place in and around an apple orchard that was part of a farm that sits on an elevated plane. This is where Brig. Gen. Hugh Mercer and his Continental soldiers clashed with the British army under the command of  Lt. Col. Charles Mawhood. On the American side, Mercer had about 120 soldiers from his brigade racing toward the orchard when the battle started, while Mawhood had about 450 men, according to records cited in “Washington’s Crossing.” However, more troops kept arriving on both sides as the battle raged.

Mercer had an additional 200 men from his brigade positioned a few hundred yards behind his 120 soldiers charging into the orchard. By the time the Pennsylvania militia, the Delaware Light Infantry, the Philadelphia Red Feather Company, and American marines arrived to reinforce Mercer’s brigade, Fischer estimates the Americans had about 1,500 troops, about three times the size of Mawhood’s forces.

Mercer died after the battle from multiple bayonet wounds inflicted by British soldiers who thought they had captured Washington. He was left for dead near a white oak tree that became known as the Mercer Oak, according to historical accounts. Soldiers carried Mercer to a nearby house, where he was treated by Benjamin Rush, a surgeon in the Continental Army who had signed the Declaration of Independence.

In 1772, Thomas Clarke, a Quaker farmer, had purchased 200 acres from his brother, William Clarke. He replaced the house on the property with a two-and-a-half-story Georgian home that still stands.

What became known as the Thomas Clarke House was used as a hospital for both sides after the battle. Despite Rush’s efforts, Mercer died there nine days after the American victory at Princeton.

The original Mercer Oak lost a large branch after it was struck by lightning in 1973; strong winds in 2000 damaged it further. A young tree now grows in its place.

“The oak tree and its descendent are fixed points, so we know where Gen. Mercer had been wounded and how he died and where this happened,” Freeman Dyson, a retired professor of physics with the Institute for Advanced Study, said in an interview with The Daily Signal. “But the rest of the battle really took place all across town and across the countryside. The real battlefield includes the town of Princeton.” The Daily Signal met with Dyson at his Princeton office before release of the joint statement announcing the compromise over housing plans. Dyson said he intends to live in the new housing, which he describes as “badly needed.”

The Institute for Advanced Study originally proposed to build seven single-family homes, but is moving forward with an alternative plan for eight townhouses in addition to the existing faculty housing.

“The institute has already very generously donated land that has been used for historical preservation,” Dyson said, adding:

The Daily Signal asked the Institute for Advanced Study to comment on the dispute over the housing project and the recent compromise. The institute referred The Daily Signal to its online material, which includes a detailed overview of the new housing plans and its contributions to the Princeton Battlefield State Park.

In the online material, the institute also discusses where it differs with the Princeton Battlefield Society over some of the claims made by the preservation group about “key engagements” of the American and British troops and where they took place.

There is no dispute, however, over the significance and the importance of the battle itself.

“Washington certainly had some kind of military genius for knowing the right place and the right time to attack,” Dyson said. “This was the first straight-up victory over the British, and this is what everyone who had been sitting on the fence had been waiting for, and it also got the attention of people in Europe.”

The first Battle of Trenton following the Continental Army’s stealth crossing of the Delaware—in a snowstorm Christmas night 1776—had been a victory over the Hessians hired by the British, not over British troops themselves.

The Second Battle of Trenton, also known as the Battle of Assunpink Creek, was fought Jan. 2, 1777. It involved American delaying actions that prevented the British from reaching Trenton until nearly nightfall.

Washington slipped behind enemy lines that night and attacked the British in Princeton the next day.

Washington’s earlier crossing of the Delaware is “solidified in the national psyche,” Roger S. Williams, secretary of the Princeton Battlefield Society, told The Daily Signal.

But the Battle of Princeton, Williams said, proved to be the “pivotal battle that ended the 10 Crucial Days campaign and culminated in the British decision to end their occupation of New Jersey.”

“So the crossing of Washington’s army … was indeed a remarkable tactical achievement, but it was only one part of the story of the 10 Crucial Days,” he said, adding:

Princeton did not begin, or end, the way Washington and his commanders had intended. However, without that victory, the capture of the Hessians at Trenton and the Battle of Assunpink Creek would have all been for naught.